↓
Home→Investing→Will Cryptocurrency Be The Next Dot Com Bubble? 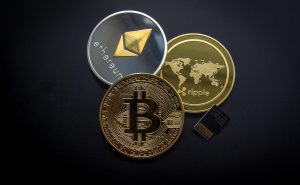 The current cryptocurrency market shares some similarities to the Dot Com Bubble in 1999-2000. By simply existing, a crypto token tends to have default value. Massive speculation is taking place among investors trying to hit it big on the next coin with rapid price appreciation.

With more than 18,000 crypto tokens today and no real use for most of them, this feels eerily familiar to internet stocks in the early days. A big shakedown ended up happening with internet stocks. The same thing could happen with cryptocurrency.

The best-known story from the dot com boom and bust saga of 1999-2000 is Pets.com. They went public with an IPO in early 2000 at a share price of $11 and raised more than $80 million. Just 268 days later, they filed for bankruptcy at a pathetic share price of 22 cents. How did something like this happen?

Pets.com had a flawed business model. The biggest issue was selling big bags of dog food. They simply cost too much to ship. The company would lose money shipping at a reasonable price to the customer. Shouldn’t this problem have been blatantly obvious from the beginning? Corporations usually approach an IPO with a very solid business model. Greed ultimately allowed this one to slip through the cracks, and it wasn’t the only one either (just the worst example).

After the stock market tanked in 2000 and tons of internet companies went belly-up, the dust eventually settled. While many companies went bankrupt and disappeared, the good ones with a solid business plan survived and are still around today. Amazon and eBay are two of the most well-known of these survivors. Keep this in mind as I begin to pivot this conversation towards cryptocurrency. Bitcoin and Ethereum are the two big names in crypto that both seem to have a very solid foundation. When the ultimate crypto winter arrives and flushes out all of the altcoins that don’t have a future, Bitcoin and Ethereum should still be standing on the other side.

This story has played out over and over again throughout history. When a new technology is invented, people see the potential of this new craze and latch on to it. A ton of money is poured into the industry and innovation rapidly takes place.

You basically have thousands or tens of thousands of companies all trying to compete for market share in the budding industry. This gets amplified even more by investors speculating which companies will be the next big thing, since successfully picking one can make someone a millionaire with a rather modest investment.

Once the market builds to a frantic pace, all it takes is something bad to happen that makes big news, and then it all comes crashing down. This type of black swan event isn’t the death of the industry though. It ends up weeding out the weak companies, while the strong survive and go on to capture a large share of the market as a result.

Since the crypo bull rally began in 2021, I’ve had this feeling that a reckoning is coming for the cryptocurrency industry. Let me clarify that this isn’t necessarily a bad thing. In fact, this needs to take place at some point in the future for the next stage in the evolution of crypto to begin.

Altcoins that don’t have real value are the targets of this market shakedown. I think the same thing will happen here that happened in the dot com boom and bust. The companies that exist just to capitalize on the money being thrown around will get weeded out. A big price crash will happen across the industry. Investors will dump the weaker coins entirely while still holding some of the big names they think will survive.

Once the prices bottom out, all of the previously invested money will get dumped into the survivors. Certain coins like Bitcoin and Ethereum will likely experience less severe declines in prices, so they’ll be identified as survivors by investors this way.

The cryptocurrencies that have a strong foundation, very loyal user base, and real-world usefulness will emerge from the wreckage as the winners. In the dot com crash, as many as 5 out of every 7 internet companies went bankrupt. With that same ratio, only about 5,000 of the 18,000 crypto tokens would survive. However, I think the crypto carnage may actually end up being worse since there are likely a higher percentage of them without any real-world use.

I’m fairly confident that Bitcoin and Ethereum will survive this upcoming crash. I also believe other coins will make it too, but it’s difficult to say exactly which ones. To me it seems entirely feasible that the market could eventually get narrowed down to a few hundred coins at most.

In some ways, I’m looking forward to this even happening. It will be the investment opportunity of a lifetime, and it will jump-start the next phase in the evolution of cryptocurrencies. After this crash is when you will end up seeing worldwide, widescale adoption of things like Bitcoin. It’s also when you could potentially see Bitcoin prices climb into the 6 or 7 figure range.

I view Bitcoin and Ethereum like the Amazon and eBay of the crypto world. Both of these blockchains have huge followings and widespread usage. Corporate investment into Bitcoin is already at high levels, so I could see these assets being protected more than others during a big market crash.

Ultimately, when the crash happens and price bottoms are hit, tokens like Bitcoin and Ethereum are very likely to present a once in a lifetime investment opportunity. They should be at low prices not seen in years at that time. Very rapid accumulation of the surviving tokens is likely among investors after the crash. This rabid buying at rock-bottom prices will force the prices to skyrocket at rates never seen before.

Personally, I look forward to the future of cryptocurrency once it can reach a more stabilized existence like the internet enjoys today. In the meantime, I’ll be waiting for my chance to take advantage of this situation to book some massive gains that I may never see again.