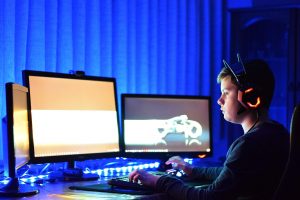 Do you love to play videos games and wish you could do it for a living instead of working a job? That’s exactly what Twitch lets you do. The biggest issue is that a lot of other people want to do the same thing, so the competition to get viewers can be stiff.

To get started as a streamer these days, you’ll need a good computer, the right equipment like a webcam and microphone, and an entertaining personality that people like to watch for hours. This guide will teach you the basics to get started, but you’re also going to learn a few tips and strategies that can give you a big boost in power to allow you find success as a streamer much faster.

Simply running a stream on Twitch can take a long time to actually make any money from it. They require 50 followers, an average of 3 concurrent viewers, at least 7 different broadcasts each month, and at least 500 minutes broadcast each month to become eligible to make money streaming.

The problem that most beginners run into is that they’ll start streaming and barely have a single viewer watching. Even after playing for hours every day for weeks, your viewer base still doesn’t improve. This discourages most newbies and causes them to quit before they really give it a fair chance to succeed.

To really be successful as a gaming streamer, you’re going to need to do some extra work and extra marketing to bring your own viewers to your channel instead of depending on Twitch to send you viewers. I’ll be discussing a number of tactics that you can use to help you accomplish this goal.

Build Your Own Audience

For the best results, you’re going to want to build your own audience outside of Twitch. This strategy allows you to let your followers know that you’re going live each time so you can have more viewers and build followers on Twitch faster. The more activity your stream gets, the more likely you are to get additional exposure from Twitch itself.

You can use social media websites and/or your own website to build your audience. Just remember to make these about the same topics so your audience will actually want to watch you play a game. Building followers on a social media network will allow you to drive more people to view your streams as soon as you start playing each day. If you build your own website, create an email newsletter list that you can use to contact your viewers directly.

This may seem unnecessary to some people, since you’re already building a following on Twitch. However, the key secret here is to boost your Twitch viewership numbers. When you have more people watching your stream, you’ll get higher placement on the Twitch website, which makes it much more likely that they’ll send you additional viewers. The streams that don’t have anyone watching are next to impossible to gain extra exposure on the website.

Take some time to watch some other streamers. Watch some of the most popular streams to see what they do to get so many viewers. Don’t just pay attention to the games they’re playing but also to how they’re talking and interacting with their audience.

Also be sure to look beyond the most popular gamers. Try to find a few people that have 50-100 viewers at a time and see what they’re doing in comparison. To a certain extent, these gamers have to work much harder to gain new viewers compared to the most popular streamers, so I would be inclined to try to copy a mid-tier player instead of the most popular people.

Doing this type of research can help you pick up some new tips and strategies to make your streams more interesting. You can also learn about which games people prefer to watch. Make sure you revisit this research every few months to make sure you’re not missing out on a hot new game that everyone wants to watch.

Involve yourself in as many gaming communities as you can find. Social media networks and even Reddit can be excellent places to talk with other gamers. Meet people, talk to them and make new friends. By simply engaging with others, you can often gain more exposure for your streaming channel.

With likeminded friends in the gaming community, your friends may be able to help you out by boosting your viewer numbers on Twitch to help you build up your account. You may even be able to connect with a few other streamers so every can take turns watching each others streams. Simple tactics like this can go a long way towards getting started with an initial base of viewers and followers. Without these additional tricks, you could spend months or even years longer trying to build up a minimal number of viewers just so you can start getting paid.

Keep in mind that streaming on Twitch will take time to build up an income. Do not expect to make a full-time income for at least a year and possibly multiple years. Even with the best marketing outside of Twitch, it’s still going to take time to build this into a successful side hustle. Be patient and just enjoy playing games in the meantime.