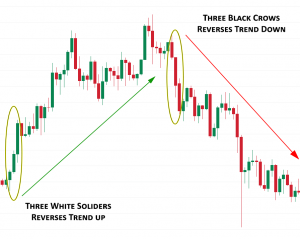 Three White Soldiers and Three Black Crows are candlestick patterns that are more complex than others I’ve talked about previously. These candles can often indicate a shift in market sentiment that could lead to a trend reversal. One is bullish and the other is bearish, so you can potentially watch out for these signals under any market conditions.

By themselves, these two patterns may not be especially meaningful, but if you combine a number of other trading indicators along with their appearance then they can provide fairly accurate and reliable entry and exit points. 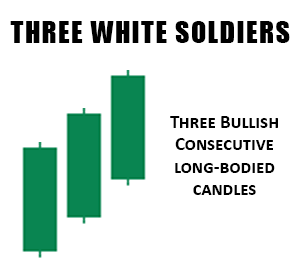 The Three White Soldiers pattern can also be called three green soldiers since either color is a bullish candle. To match it, you’ll need three consecutive bullish candles in a row. At a bare minimum, each candle should have a large body, open somewhere within the body of the previous candle and then close above the previous close. You can also consider these to be a more powerful indicator when shadows and wicks of all three candles are small or even non-existent.

In general, you also want to see this pattern appear after a short-term price downtrend. This makes it more likely that it is indicating a trend reversal is taking place. 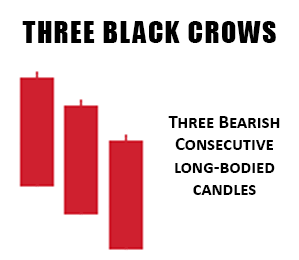 The opposite pattern is the bearish Three Black crows, which can also be referred to as three red crows. This time you need three bearish candles in a row that all have large bodies. The 2nd and 3rd candles should open somewhere within the body of the previous candle and close below it. You can also view this signal as more powerful when shadows are small or missing entirely.

This time you want to see a short-term price rally before the pattern appears to indicate that a reversal down may be happening. However, make sure you combine it’s appearance with a number of other indicators to confirm your trades. I’ll be talking about tips for buying and selling with these patterns later in this guide.

Since these are trend reversal patterns that show a big movement in price activity, there is a big shift happening in the market sentiment during these three candles.

With three white soldiers, the sellers are in control of the market before the pattern appears. Bulls are then able to rapidly take over the price action, while bear activity stalls out. When you see large bodies without shadows or with very small wicks, it tells you that there isn’t much resistance in the price movement.

The opposite occurs with three black crows. Buyers have a firm hold on the price action at first, but then the bears are able to reclaim control and begin to drive the price down again. Larger bodies and missing wicks indicate even more selling pressure to rapidly drop the value of the asset.

How to Trade Patterns

This particular chart illustrates both of these candlestick patterns quite well. The chart begins with price action falling – the few candles outside of view to the left were also mostly bearish. First a pattern for three green soldiers appears, indicating a bullish trend could be about to take place. Price action then continues to rise for a while. Eventually the opposite pattern occurs, so the three red crows signals a price reversal back to the downside.

In this example chart, you could’ve placed an order to buy with the appearance of the first candle pattern. Selling could’ve occurred at the first or second price peak. The second peak that occurs right before the price action truly begins to fall is actually marked with a bearish inside bar pattern that would’ve provided an excellent exit point for a nice profit.

With the appearance of the three black crows, another order could’ve been placed here to short the stock or cryptocurrency (this is actually a real-life chart from Bitcoin BTC). This pattern and chart offered two really great trades in this scenario.

Besides the appearance of one of these candlestick patterns, you should also look at other factors, signals and trading indicators before you actually decide to place a trade. Support and resistance levels are always good indicators to use. For example, as the price action bounces off of a support line and a three white soldiers pattern appears, it can help to confirm the trend reversal.

Trading volume can also be another important signal. Right before one of these patterns appears, you want to see volume on the low end, but then there is a rapid spike in trading volume that coincides with the three candles in the pattern. When you see this rapid jump in volume activity that also matches up with a white soldier / black crow pattern, it indicate a more powerful trend reversal is likely to occur.

One final indicator that I recommend using here is the relative strength index (RSI). When you have rapid price movement in either direction combined with small shadows and high trading volume, it’s quite possible that you could venture too far into oversold or overbought territory. When this happens along with the candlestick pattern, it can actually stall out the price movement temporarily and cause a sideways moving market for a while. However, in many cases the price trend will continue once the RSI indicator conditions level out again.