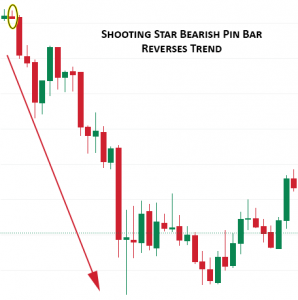 The Shooting Star is a bearish pin bar candlestick pattern that is popular among traders. Buyers will commonly use this candle signal to let them know when to sell their long position and take profits before the price starts to drop. Sellers use it to open short positions, since the pattern will often indicate a trend reversal to the downside. This tutorial guide will teach you everything I know about this candlestick including how to trade it.

There is also a bullish pin bar called the Hammer. It’s the opposite signal from the shooting star. Both buyers and sellers can utilize these patterns to swing trade a range bound security. However, you should also combine these with other indicators to confirm a likely market move before you decide to place an order. I’ll be discussing trading strategies like using lines of resistance to boost the prediction accuracy of the pin bar candle.

It’s amazing how such a small, simple candle can tell you so much about the market conditions and even the potential price direction that will happen next. The shooting star candle pattern is a favorite among short sellers, but it’s also great for closing out long positions. Since this is a bearish pattern, it will work best during long-term bear markets. However, you can also utilize it in sideways markets as long as you’re careful to combine it with other trading indicators to swing trade.

You may notice this candle will actually appear fairly frequently on your stock and crypto charts. It’s appearance doesn’t guarantee a trend reversal to the downside, even though it is possible. First you need to be sure that the overall market conditions I described above are correct. You also want to see this pattern show up after a short-term price increase. That is when it is most likely to mark a reversal, when there has been a lot of buying activity leading up to the pattern.

This pattern only requires a single candle, as you can see from the illustration. In this example, I have shown the candle as as bearish candlestick, but you can technically have a white / green shooting star too. Even a bullish shooting star is still a bearish indicator. The main difference between a red and a green shooting star is their signal strength. In general, you should consider a red candle to be more bearish. However, a green bearish pin bar can still set off a selling rally.

The shooting star candle is identified by it’s short body size and a long upper wick / shadow. The longer the better for the wick, but I personally like to see the wick be at least two times the height of the body. My example pin bar shows no lower shadow at all. You can have a lower wick as long as it’s small though.

Never fight the overall market trend when you’re trading. Since this is a bearish signal, you’ll want to stick to bear and sideways markets to initiate short positions. However, you should also use this in bull markets to exit long positions for profit taking. Even though you want to short a bear market with this signal, you still need to see a decent short-term rally in value before the pattern appears. Quite simply, you need an upward trend for a trend reversal to take place.

The fact that such a small, unassuming candle can tell you so much about the emotional state of buyers and sellers is a bit mind-blowing in many ways. However, the levels of fear and green being experienced by trades isn’t just based on the shooting star alone. The market conditions that are required for this pattern to appear will also contribute to their emotional state.

During an overall bear market, buyers are nearly always full of fear. Their profits have plummeted, and they are desperately trying to identify a market bottom. Inexperienced traders may buy every dip in price thinking that a bottom has been reached. They fear losing more money, but they also fear missing out on the market rally recovery that will help them recover their losses.

When a short-term rally occurs, buyers gain a strong hold on the activity and drive the price action higher. To the untrained eye, this may seem like a recovery, so buyers pile into long positions seeking a profitable trade. It’s often the setup for a bull trap though, since prices drop back down to support levels a few days later in many cases. That’s when the shooting star appears. The short body tells you that buyers are losing their power and sellers are beginning to take over the market. This is reinforced even more when the candle is red / black. The long upper wick tells you that a battle happened above the opening and closing prices, but the bears won and drove the cost back down.

After a bearish pin bar pattern has shown up, you know that buyers have lost their foothold on the market and sellers have now taken over. Assuming other signals in the market agree, then the future cost is likely to fall. Now you just need to know how to trade the shooting star to be ready to use it to help improve your trading accuracy.

How to Trade the Shooting Star

First take a look at my example chart below that shows you a shooting star candlestick that led to a trend reversal. It’s worth noting here that I realized I made a minor mistake with this picture once I had it published. I didn’t show the short-term price increase that happened right before the pin bar. You can see a single green candle at the start of the chart before the pattern though – just imagine a couple more bullish candles before it. 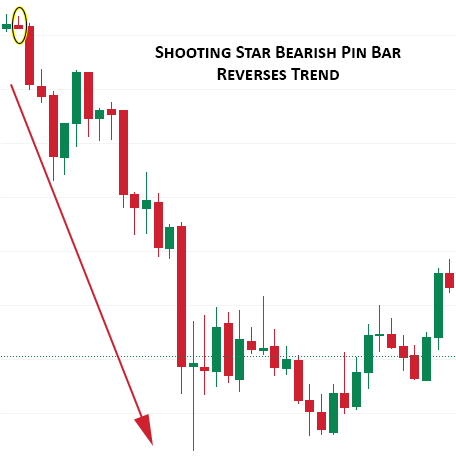 As I mentioned, the short-term price increase before the pattern isn’t clearly shown on the illustration above, so make sure you see it when you trade this candle. Once the bearish pin bar appears, there is a rapid drop in cost. This ends up being a rather large downtrend that has a few minor bounces in it. Taking the trade all the way down would’ve resulted in a very profitable move.

I recommend trading all candlestick patterns on longer timeframes. Four hour and daily candles give you a much more accurate picture of trader emotions, while shorter timeframes will often give false patterns that lead to bad trades and lost money.

I’ve said a few times that you can’t trade the shooting star pattern alone. You need to combine it with other indicators. The #1 thing you should pay attention to in combination with this pattern is the resistance level. This is often the best place to open short and close long positions when a bearish pin bar appears under the right conditions.

A resistance level can be defined in a number of different ways. It’s not an exact science, so you’ll need to plot a few different lines on your chart to try to identify where the price action commonly reverses. After you’ve identified the metric to use as a trend line, you can then watch out for the pattern to initiate orders. Try moving averages, supply and demand at longer timeframes, Fibonacci retracement lines, trend lines and more to figure out where support and resistance levels lie.

Even though you’ll often be placing short orders and closing long positions when the shooting star candlestick pattern shows up at resistance levels, it is still helpful to find the support level as well. The other half of your trade should take place at the support line. This would mean support is used to figure out when to close your short positions and/or open long positions.