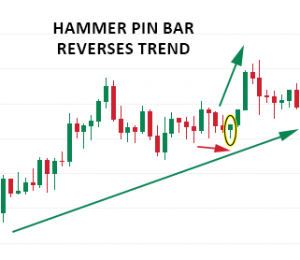 The Hammer is a bullish pin bar candlestick pattern. You want to look for this candle at the end of a short-term downtrend in prices, since the candle will often reverse the trend and cause prices to rise again. That makes it a perfect opportunity to enter long positions or possibly to sell your short positions.

There is also a bearish pin bar, called the shooting star. It’s basically the opposite of a hammer and often marks a trend reversal to the downside. Both signals can be used to swing trade a price bound market. However, you should always use other trading indicators along with the pin bar patterns. I’ll discuss specific trading strategies and tips for this candlestick later in this analysis guide.

The hammer candlestick pattern should be used during bull markets or possibly during sideways markets. Overall, you don’t want to fight the price trend while trying to trade candlesticks. However, you need to watch out for a short-term price decrease to appear before the bullish pin bar to indicate a good opportunity to trade the price as it rises.

This candle pattern is really popular among traders. It can be used along with other indicators to open long positions, and you can easily spot the candle on a chart. Like other patterns, it’s really important that you look for hammers on longer time frames like 4 hour or daily candles since you’ll get too many false signals at shorter timeframes. 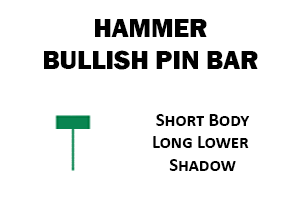 The hammer is a bullish pin bar, but the actual candle can technically be either bullish or bearish. However, you’ll notice that bullish hammer candles have more price movement power in most cases, so I personally prefer to stick to trading the bullish candle. The bearish candles still qualify as a red hammer when they have the right shape, but the bears still have a minor hold over the price action, so there’s not as much trend reversal power.

The pattern consists of a single candle that has little to no upper wick, a short body, and a long lower shadow. In some ways, it looks similar to a dragonfly doji. The main difference is the body size. There is more price movement between the opening and closing with a hammer than a dragonfly doji.

The appearance of the green hammer pin bar does not guarantee a price reversal. I highly recommend combining this pattern with other trading indicators, which I’ll take about soon. You will often see a lot of false hammers, so be sure to examine other indicators. Even when the set-up is perfect and other signals confirm a good trade entry, it’s still possible for the market to go in the other direction than you expect. This is why setting up stop losses can be helpful to quickly exit inaccurate trades.

A green hammer pattern tells us useful information about the current emotional state of both buyers and sellers. First, you want to see this candle appear after a short-term downtrend in prices, so the bears have control over the action.

During the pin bar candle, the bears manage to drive down prices even more. However, the long lower wick tells us that the bulls were able to fight back and recover prices back above the opening.

After the price action begins to swing above the opening, the buyers have a firm control over the market now. This is what indicates the trend reversal, since there has been a struggle between the buyers and sellers during this candle, and the bulls have emerged victorious.

How to Trade the Hammer Candle

The first thing you should notice is the overall trending price direction. It’s a bull market and prices are trending up, so this is the perfect time to be on the lookout for a hammer pattern. Right before the hammer appears, there’s a short-term price decrease. The price then swings back up after the hammer candle appears.

It’s extremely important that you trade the bullish hammer pin bar candle in combination with other indicators. Support and resistance lines are often the best signals to use, but these can be generated in numerous different ways.

8 and 21 Moving averages, supply and demand, trend lines, Fibonacci retracement lines can all act as support and resistance levels at times. Your job as a trader is to plot those levels and attempt to figure out which ones are controlling the market movement. You then wait for support line to get hit by the price action. Trades to buy a stock, cryptocurrency, or other security can then be initiated when the hammer appears at the support level.

Once you have this system figured out, it’s fairly easy to initiate profitable trades. However, don’t get too comfortable and get greedy because it’s not a guaranteed trading strategy. When breakouts occur below a support level where you’ve initiated a trade, you can end up with a loss pretty quickly. Make sure you set up stop losses to exit trades at levels that would only be reached if the price action fails to move as predicted.