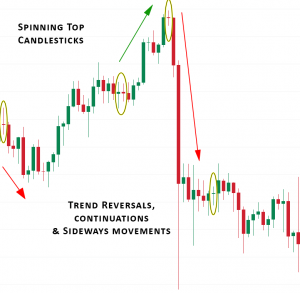 The spinning top candlestick pattern indicates market indecision. This can lead to a wide variety of future price movements, so it’s important to understand this pattern and how to trade it.

I highly recommend never trading this candlestick simply because it shows up on a chart. You must use support and resistance levels, other patterns, and other indicators to confirm signals to buy or sell. By itself, the candle would lead to a lot of trades that don’t pan out like you expect them to.

This pattern analysis is part of a much larger training series that will teach you everything you need to know to successfully trade candlestick charts. Make sure you take a look at the complete guide here: Japanese Candlestick Patterns.

The spinning top is a pattern that you will frequently see in candle charts, so it’s appearance is NOT always an indication that you want to buy or sell. Sometimes it’s helpful to use simply to understand the current market conditions to try to predict the future price direction so you can appropriately plan your trades.

Under the right conditions, this candlestick can signal a trading opportunity. However, you’ll always need to combine this pattern with other patterns and even different market indicators to accurately and reliably make predictions.

Take a look at the picture below to see what it looks like to learn how to identify it. Please note that the candle can be red or green, so it doesn’t matter if it’s bearish or bullish. 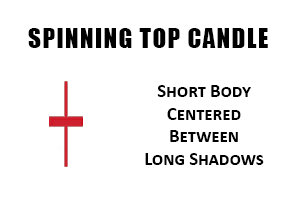 A spinning top will have a single candle that is bearish or bullish. The body should be short but there should still be some price movement between the open and close. This body should then be roughly centered between the wick and shadow, and both upper and lower shadows should be long.

Make sure you’re observing more than this one candle though. Take note of the trend that is happening leading up to it’s appearance. Watch for other indicators such as touching a line of support or resistance, or even the appearance of a second candlestick pattern. Finally, you’ll want to watch what happens in the next candle or next few candles to confirm price movements.

This pattern is visually similar to the neutral doji, but there are some key differences to note. Dojis will have almost no body, while a spinning top will still have a small body but it will have a bit of height to it.

Another key difference is the shadows. A doji will typically have shorter shadows, while it’s an identifying characteristic for the spinning tops to be much longer.

The psychological differences are fairly minimal. Both patterns represent market indecision and uncertainty among both buyers and sellers that results in little price movement. However, a spinning tops longer shadows indicate that there was a bigger battle in both directions before the indecision set in. Trading strategies for both are quite similar – you need to confirm a trend move with other indicators before taking action.

I’ve searched through cryptocurrency charts to find a great example of this pattern for you that demonstrates a wide variety of it’s capabilities. Below you can see five spinning tops (two of them are together). Some of them indicate trend reversals, while others show continuation patterns or sideways movement. Right after the first pattern’s downtrend, you can also see a neutral doji that essentially acts just like the spinning tops.

The key thing to remember here is that you can’t really predict what’s going to happen next simply because this candlestick appears. You must take other factors into consideration before making decisions to open or close positions.

Like many other candle patterns, the spinning top is also best used along with other trading indicators. The easiest of these strategies involves plotting trend lines and/or levels of support of resistance. You may need to plot a few potential levels on your charts at different timeframes to truly get a clear picture of which indicators are most likely to affect future price movement.

In particular, orders to buy and sell at higher timeframes can give you a general idea of where support and resistance levels are likely to be at. Moving averages can also contain price action, but you may need to play around with a variety of these averages to figure out which ones are controlling the market.

After you have some levels plotted at a chart that are likely to contain the price movement, you can then start looking for a spinning top pattern. First try to identify this candlestick appearing after costs trend down or up. When this occurs near one of your support or resistance levels and the pattern makes an appearance, you might have a trend reversal upcoming.

Even with that setup appearing, you do NOT want to place an order yet. You still want to wait for the next candle or potentially the next few candles to get a confirmation that the trend reversal is actually taking place.

Refer to my chart above to see examples of this strategy in action. The first three sets of spinning top patterns on that chart all have a confirmation candle that shows up immediately after or within two candles after the pattern itself. This confirmation can also occur as another candlestick pattern that reaffirms the trend reversal, so you really have to pay attention to the surrounding conditions to accurately trade the spinning top candlestick.