The doji candlestick is another chart pattern that all traders need to understand because it is among the most powerful trend reversals. Overall, doji can really be considered to be a neutral candle, since it can indicate a potential swing to the upside or downside depending on the overall market conditions.

The doji candle pattern has multiple forms. The hammer (bullish) and gravestone (bearish) dojis are both similar patterns that are covered on separate pages of this analysis tutorial series. I’ve created a couple of examples for the neutral doji below to demonstrate how this candlestick pattern works.

You should consider the doji candle pattern to be one of the most powerful candlesticks. It’s valid during both bull and bear markets, so you can potentially watch out for this signal at any time.

The main defining characteristic of the neutral doji is the lack of price movement. The opening and closing prices of the candle will be the same or very close to each other. For this reason, a doji can technically show as a bearish or bullish candle color, but it doesn’t really matter which one shows up.

Take a look at the example illustration below to see a doji candlestick. The open and close prices are almost the same, so you end up with candle shadows and a very short or almost non-existent body. 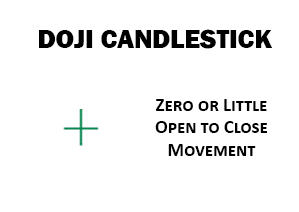 I don’t know if other traders or chart analysts refer to this doji pattern as neutral, like I do. Let me explain why I refer to the candle as neutral. Technically, it’s situationally bullish or bearish. However, since the doji can be used in either situation I basically classify it as both by calling it neutral.

When the overall market prices are on an uptrend, you mostly want to focus on bullish candlestick patterns to initiate trades. The opposite is true for downtrends. With a neutral pattern, I can use it in both markets.

A doji pattern only requires a single candlestick. As I mentioned previously, the open and close prices of the candle will be the same or very close so that the body size is tiny. Shadows are often much longer, but they don’t have to be to qualify for this candle pattern.

A doji pattern tells you that there is indecision in the market. Neither bulls nor bears are in control of the market when this candle appears. By itself, this candle may not be meaningful at all. However, when it shows up after a big increase or decrease in prices, it can mark a trend reversal.

First think about a short-term upward price trend. Bulls are in control and outpacing the bears, causing the prices to rise rapidly. At some point that rally has to end. When it does, bulls will start to lose their power when the bears manage to equalize the market. That’s when the doji candlestick shows up to indicate that market balance. This tells you that the power of the rally is fizzling out and will likely reverse.

The same thing can also happen during a downtrend in prices. Bears have full control and are driving the prices lower. As that strength and activity begins to fade, the bulls will slowly take over and balance out the market price. Again, this is when your doji candle appears to mark the likely trend reversal. Prices are likely to start rallying when it shows up after a downtrend.

How to Trade a Doji Pattern

This tutorial shows an uptrend in prices that is reversed after a doji appears. However, the exact opposite can also occur with this same pattern (prices can be trending down and then reverse when this candle appears).

In general, you’ll want to trade the doji candlestick pattern on larger timeframes. Four hour and daily candlesticks will give you much more accurate trades than a 1 or 5 minute chart, so this can heavily affect the dependability of this candle.

It’s also very important not to fight the overall market trend. Prices will bounce up and down short term, but there is always a larger trend taking place on a larger timescale. Pay attention to those larger trends and try to concentrate your trades in the same direction (trade long positions when the market is trending up and short positions when it trends down).

The doji must also appear after a short-term price increase or decrease to consider it as an entry or exit point for a trade. This pattern will often appear during low activity and/or sideways markets and won’t always indicate a profitable trading opportunity.

Like many other candlestick patterns, the doji should also be used in combination with other market indicators before you make a decision to buy or sell. Support and resistance levels are some of the best indicators to use, in my opinion.

The lines of support and resistance will often be a short-term range that the asset trades between. They could be based on trend lines, supply and demand, moving averages, and more. You simply need to identify the trading ranges each day and attempt to swing trade between them, but only in the overall trending direction.

During a sideways market, you can potentially use this signal for both long and short trades. However, always be prepared for a breakout from the trading range by using stop loss orders.