I’m very concerned for the community and investors that still exist for Luna Classic (LUNC) and LUNA cryptocurrencies. In May 2022, LUNA and UST collapsed in spectacular fashion. Many speculate that the founder, Do Kwon, could’ve been involved and may have profited from the collapse, but there is no proof on either side.

Without a clear direction on what happened, it’s hard to be confident to risk money on these ventures again. This risk has been amplified even more recently by LUNC validators. @LUNCDAO on Twitter is one of these validators. Their tweets have been rather concerning lately to the point where I’m beginning to suspect that LUNCDAO might be Do Kwon himself or financially connected to him in some way.

I’ve collected a series of tweets from LUNCDAO that are highly questionable. The most recent of these is an outright, blatant lie, and I can prove it. If I can prove a lie for one tweet, who knows where the lies really end. I’m going to share my knowledge about this subject with you in this post so you can make your own decision.

This tweet says..
“We had an amazing time at the $LUNC DAO annual staff party yesterday. Thanks for coming everyone”

The tweet also includes a video of a pool party with hundreds of people. As the camera pans across the pool and the video ends, I caught sight of a large TV screen on one side of the pool. After pausing the video and zooming in, I could see the words clearly saying “Swim Thick 2022”. 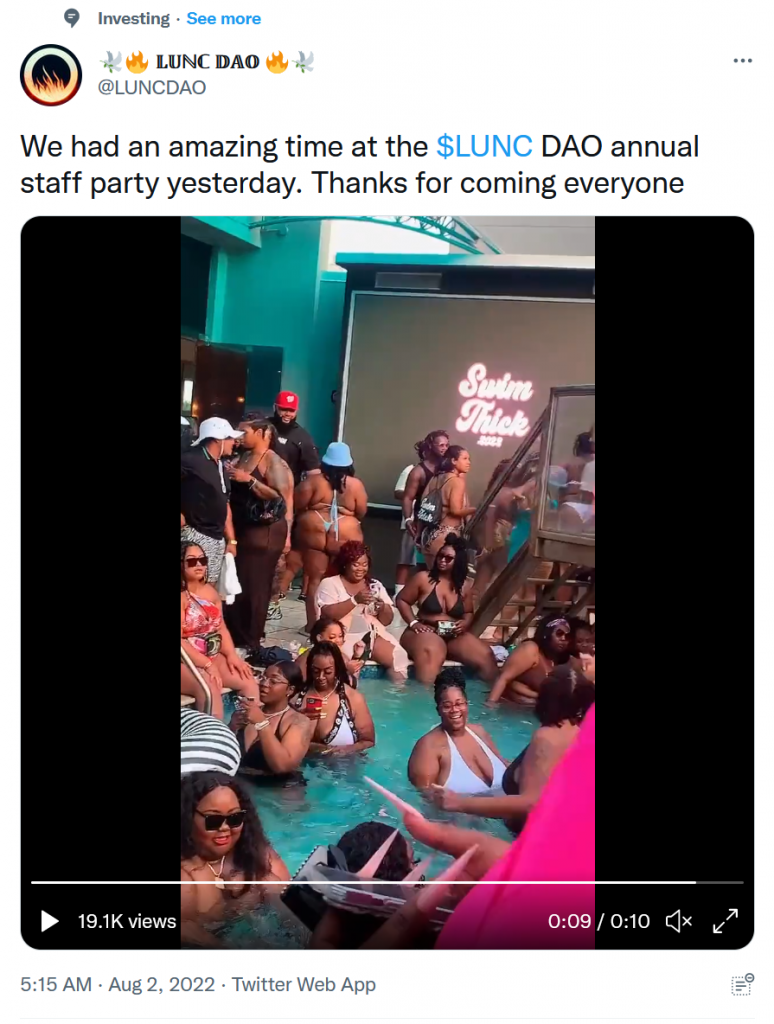 Swim thick is an annual pool party that has been held in Atlanta, GA and most recently in Houston, TX this year on July 29 – July 31, 2022.

To me, this is pretty obviously a lie. The video was taken from a real pool party and is just being used to fake a company party for LUNC DAO to make them seem bigger and more important than they are in reality.

I’ve reached out to the organizers for Swim Thick 2022 and also multiple people that were actually there to confirm that they have no connection to LUNC DAO, Luna Classic, LUNA or Do Kwon. I will update this post once I have a statement to provide to dispute this claim without any doubt.

So far I have heard back from one person that was actually at the party in question. She was very helpful to take the time to confirm that the party is indeed Swim Thick, an annual event running for 5-6 years now, and it has nothing to do with LUNC DAO or crypto in any way.

Thank you very much @topn0tchfatty for confirming what I suspected. 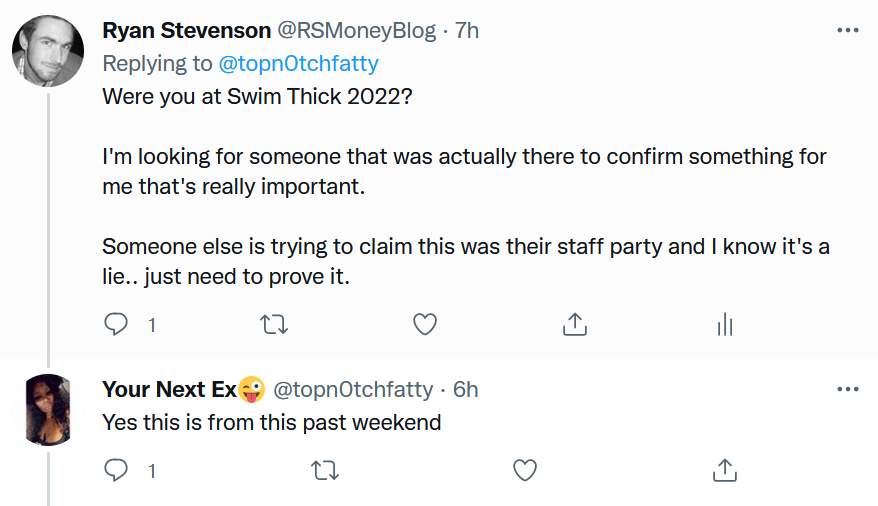 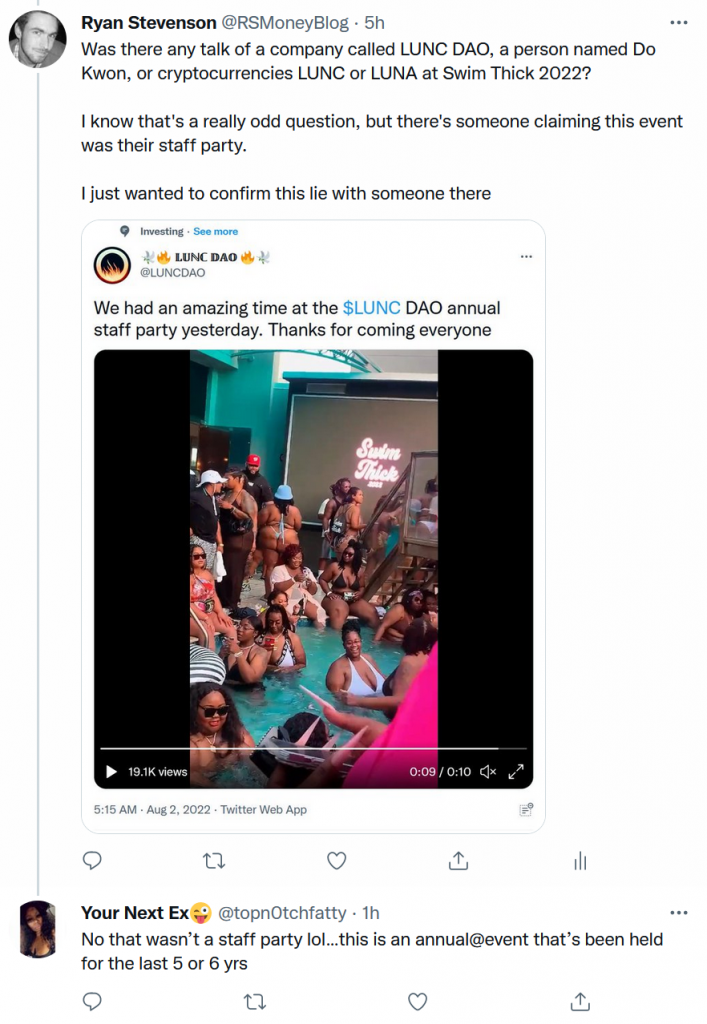 I’m still waiting to hear back from the event organizers to confirm this on the official side of things, but I take the confirmation of one person in attendance as proof enough that the LUNCDAO tweet is a lie.

The info about the pool party is alarming, but I was already watching this account because of many other discrepancies and bits of odd information being tweeted. When you combine all of this information together, it seems like there is something really fishy going on here.

On July 29, these tweets were made about the CEO of LUNC DAO.

Another tweet on the same day references this woman as their CEO again. Alexandra Larchenko appears to be the woman pictured here. 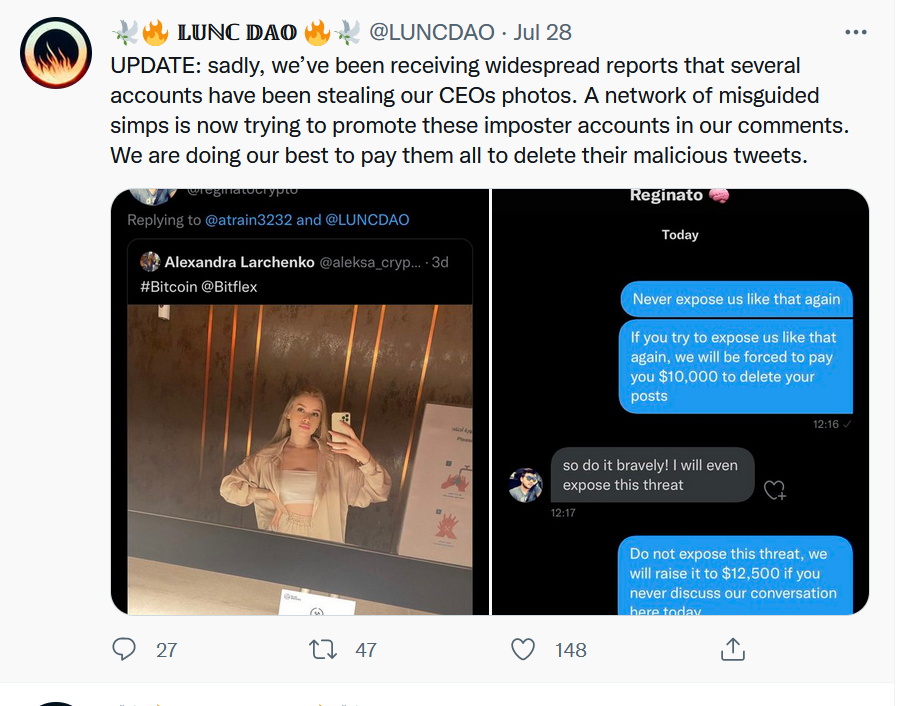 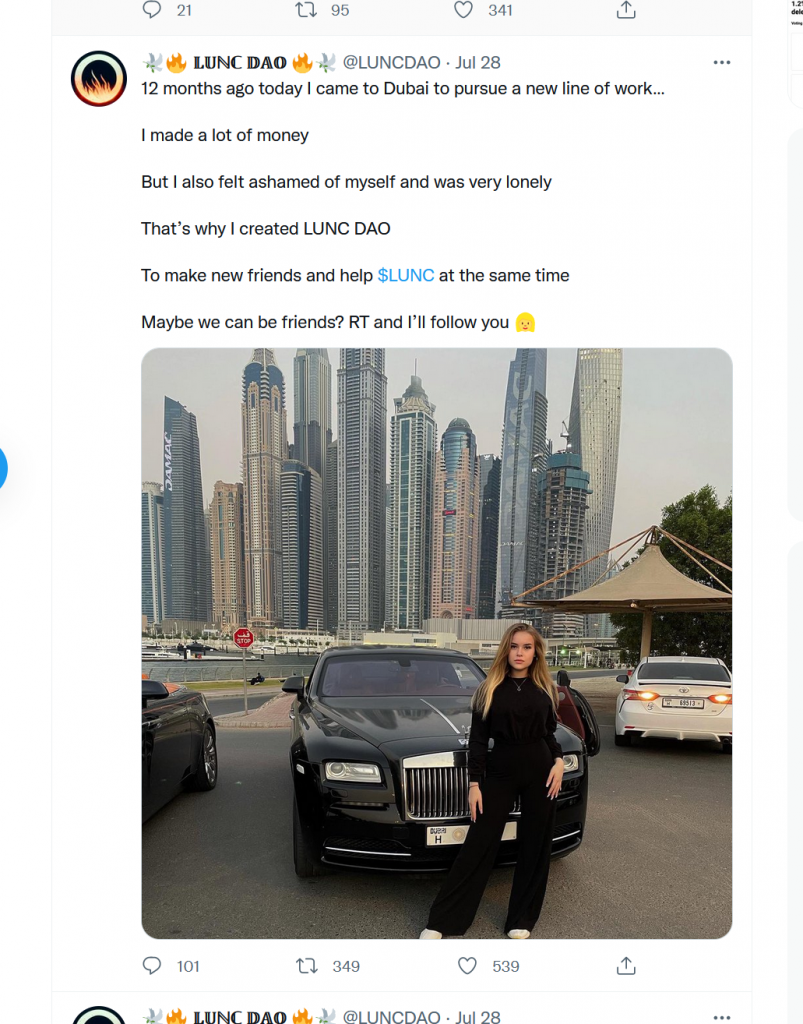 The very next day, on July 29, 2022, a couple more tweets are made that reference the CEO.

The tweet says.. “Create businesses + DAOs. After growing $LUNC DAO to 37k followers”. According to this tweet, it sounds like this CEO is also claiming to have created and grown this business. Pretty sure companies don’t have more than one CEO. 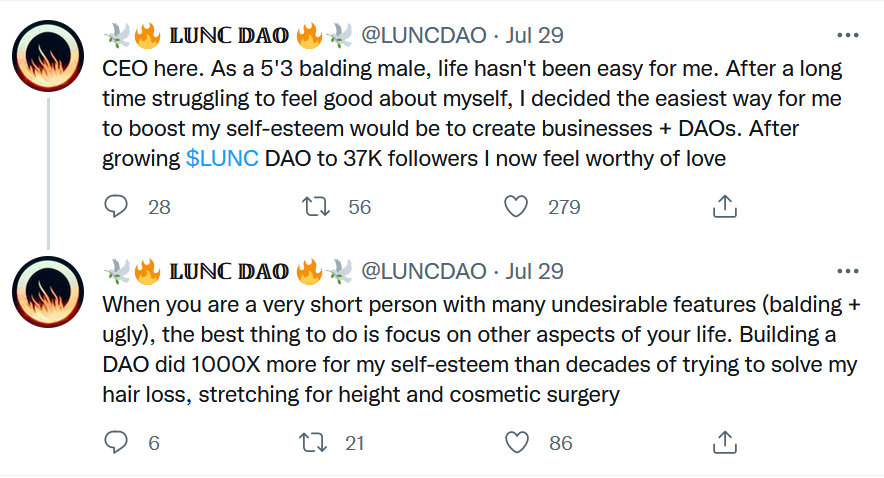 I’m about 99% convinced that the person tweeting on the @LUNCDAO account is a guy because of a tweet published on July 28, 2022. This was the same day the CEO was claiming to be a woman, by the way.

You can see the tweet below. I’m a guy, but I personally found this tweet to be quite tasteless and disgusting. In some ways, it comes across as a joke, but there’s also a serious quality about it.

Overall, the tweet sounds very condescending towards women, so I really can’t imagine that a female CEO would post it. For this reason, I heavily lean towards the belief that the CEO is male. 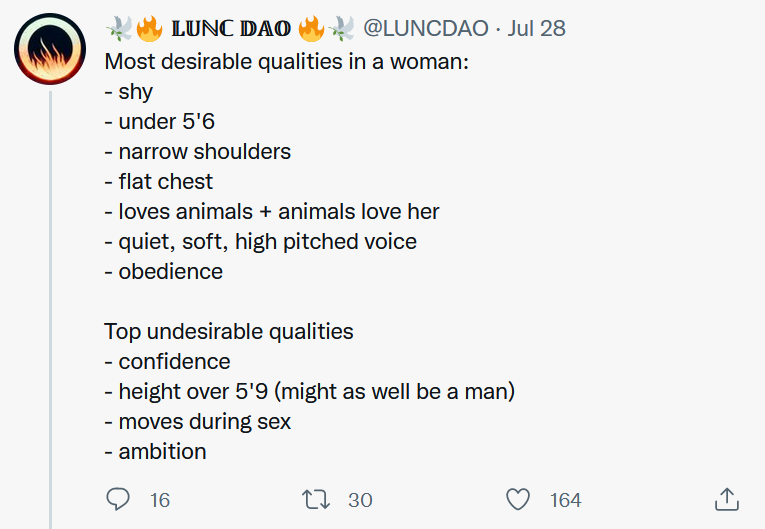 This next tweet caught my eye because I’ve been marketing for 27 years and have done it full-time for a living for 13 years. One of the first marketing conferences that I attended more than a decade ago taught me a strategy using positioning.

The idea behind this tactic is quite simple: take the names of well-known people or brands and include your own name or brand in the list. By seeing your name along with the well-known names, it transfers some of the trust and authority to you.

The easiest way to implement this positioning strategy was to create a website where you talk about the leading brands in your field and then include your own brand too.

Now that you’re familiar with this marketing strategy, take a look at the tweet below and see if it sounds familiar. These are arguably some very well known names from history and from today. Most of them innovators in their fields. And they include Do Kwon in this list? This is a very blatant attempt to build him up to be much more than he is in reality. 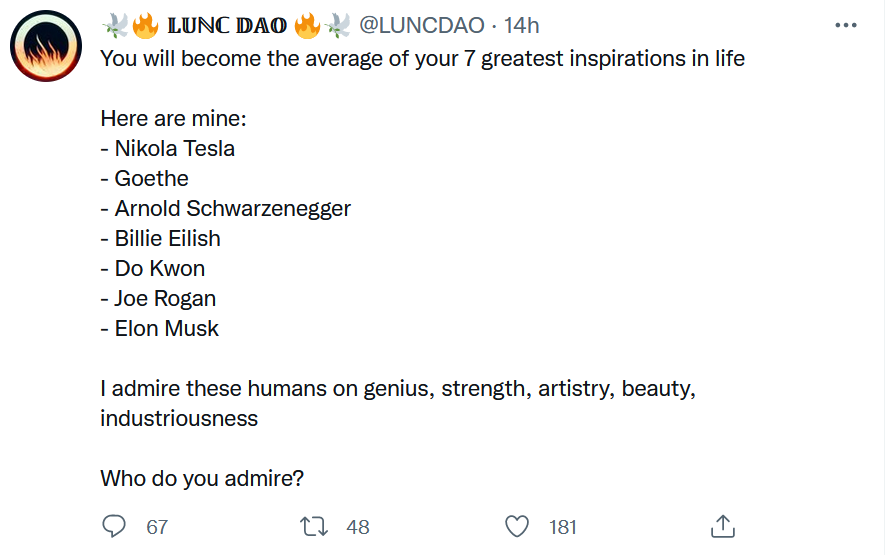 Do Kwon Hiding in Plain Sight

I was already suspicious of this Twitter account, and then I saw this tweet. They basically quoted that someone claims they are Do Kwon and replied with “Nobody will ever believe you”. This is something that Bill Murray is famous for saying when he does something crazy like sitting at a table in a restaurant, eating a french fry off someone’s plate, and then getting up and walking away while saying this phrase.

They also provide a Larry Dossey quote “If you want to hide the treasure, put it in plain sight. Then no one will see it”.

Put yourself in the shoes as the CEO of LUNC DAO with the knowledge of what happened with LUNA and Do Kwon. Why in the world would you ever say these things, much less post them as public tweets?

To me, there are only two valid explanations here:

#1. @LUNCDAO really is Do Kwon and he’s that cocky to make these tweets thinking he is outsmarting everyone.

#2. @LUNCDAO isn’t Do Kwon and is just incredibly immature and completely blind to what is happening in the Luna community. 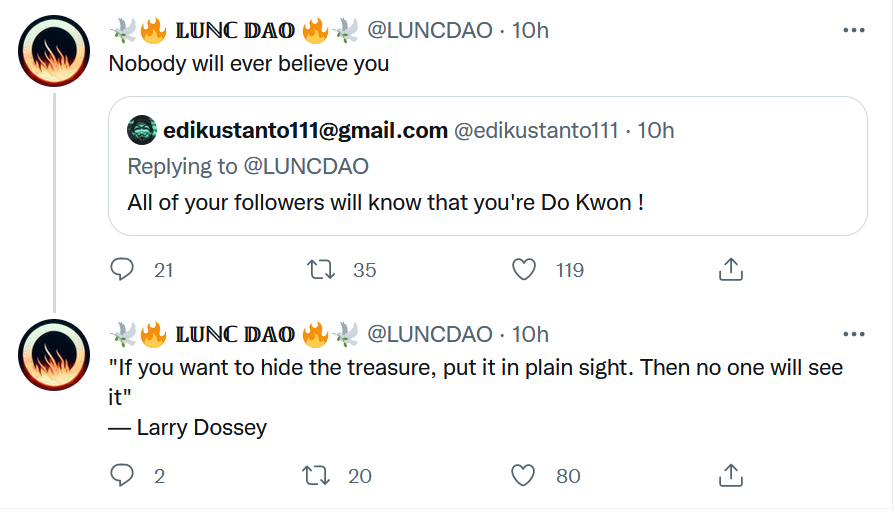 I’m not going to show any pictures to back up this claim, but you can go browse the tweet history of @LUNCDAO on Twitter if you want to see the proof for yourself.

BEFORE May 12, 2022 – @LUNCDAO only retweeted tweets from other accounts. Most of them were some kind of online coach.

AFTER May 12, 2022 – @LUNCDAO instantly became extremely active posting their own tweets. A staggering number of them say glowing things about Do Kwon. It’s honestly unnatural. Go see for yourself.

That’s the question that keeps bouncing around in my head. Why would this account only become active after the collapse? Why would it post very contradictory information and even blatant lies? Why would it tweet in ways that seem like attempts to try to provoke people that are mad about the LUNA collapse and Do Kwon?

None of it makes sense to me unless @LUNCDAO actually is Do Kwon. If that is true, it seems to make all of the information fit perfectly. I can’t say that it really is Do Kwon though, but I do suspect that it might be him or a very close connection. Nobody else would be a cheerleader for Do Kwon right now, especially not to the degree that you can see many times every single day on the @LUNCDAO Twitter account.

I could honestly sit here for the rest of the day providing dozens upon dozens of screenshots of different tweets published by @LUNCDAO that are very questionable and often downright disturbing. Here’s just a small selection of a few more.

“All Hail Do Kwon” – Really? I got a very strong Hitler vibe when I saw this tweet. Mindlessly following someone has never turned out for the best.

You’ll find quite a few of these pipe-dream tweets on their account. This stuff is not realistic at all. LUNA will NEVER received the support of the community like it did before. I don’t think they quite understand how many BILLIONS of dollars were stolen from people over it. No amount of hype-train language is ever going to convince us to try it again. Fool me once, shame on me. Fool me twice, shame on you.

This is similar to the one above, but I wanted to point out a word I keep seeing: “obedient” and “obedient to Do Kwon”. Maybe English isn’t their first language and they really meant “Loyal”? Am I reading into this too much or does the choice of the word “obedient” just not sit right with you too?

I want to emphasize once again that I don’t for sure what is happening with Do Kwon, @LUNC DAO, Classic Luna or the new Luna. I don’t know if it was a scam or not. I don’t know know who @LUNCDAO is in reality.

What I am saying is that the circumstantial evidence that I’ve found with fairly minimal effort looks very fishy.

I’m confident that information on LUNCDAO’s Twitter account isn’t accurate. Whether they’re trying to deceive people or just think these things are funny jokes, I really don’t know. However, given the situation, it would be incredibly insensitive of them to be turning this situation into a joke. Either way, it doesn’t sound like a company that should be supported in any way. I truly hope that nobody is staking crypto with them or doing business with them in any way, for the sake of your own financial future I wouldn’t risk it.