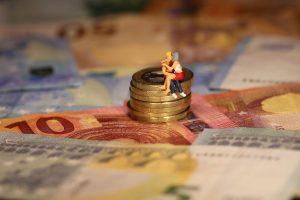 When you get married, you basically merge your life and finances together. Combining finances after marriage can often be confusing and even a bit intimidating, but it can actually save you money in the long run.

I’ve been married for almost 20 years. We’re not two separate people earning money and paying bills. All income goes into one pile, and everything gets paid from it. We have joint accounts for savings and retirement. Let me share my personal experience with you to help you combine your finances after your wedding.

You’ve just walked down the aisle with your soul mate, and now you’re living together as a married couple. How do you go about mixing your lives together, including your money, bills and finances?

Some couples choose to basically live like roommates and keep separate money and bank accounts. Each spouse contributes half of the bills from their income. While this can work just fine and does provide some financial freedom for each partner, it’s also not exactly aligned with a marriage. Getting married isn’t combining two lives in some ways but not others – you don’t get to pick and choose.

To me, it makes much more sense to combine your finances after you get married. It’s much easier to manage one set of accounts instead of trying to juggle two. There are also a lot of opportunities to save money by combining various accounts.

One type of account that is definitely worth combining is insurance. Car insurance in particular will provide you with a discount when you have more than one vehicle on the same account. Savings of 10% per car should be expected. You simply end up saving money and reducing the number of bills you have to worry about paying each month.

There are also other types of insurance that may also be useful to combine. Life insurance, renters’ insurance and even homeowners insurance. Even if you won’t save any money by combining an account, it’s still usually worth the effort just to reduce the total number of monthly bills to pay.

If a marriage ends up in divorce in the future, it’s not complicated or really even risky to have these accounts combined. You can simply call up your insurance provider and have them split an account at any time.

Various utilities and other bills can also be combined. Utilities for your house will obviously end up combined since you’ll likely move in together and not live in separate residences. However, you should also consider things like cell phone bills that may not be tied to your house and yet can easily be combined. You’ll save money in most cases by combining two cell phones into a single plan. There is usually a set charge for the first line and additional lines cost less, so two lines combined will be cheaper than they would be on their own.

There could be a wide variety of other types of accounts that both partners in a marriage have separately at first. These days, streaming services are one that is very common. You simply won’t need two Netflix accounts anymore once you’re married.

Overall, you can typically save at least $100 per month by simply combining accounts and canceling duplicate accounts in a newly formed marriage. This can not only save you time managing bills, but it’s also quite handy to have some extra spending cash at the start of your life together with a new partner.

Even though you can’t combine certain things in a marriage, like your debt or credit score, it is still worth mentioning them briefly. When you say “I do”, you’re taking on everything from your partner’s life. This includes their existing debt and even their credit score.

As a married couple, you will typically be held liable for the debts of your spouse, although laws about this can change from state to state. You don’t want to ignore them just because a debt isn’t in your name. Both spouses should actively work to help get out of debt for the entire family.

Some community property states in the USA will allow you to get financing for a large purchase, like a house, in your name only without involving your spouse. In all other states, you basically end up getting tied to your spouse’s credit score. I also strongly believe that both partners in a married should actively work together to improve credit scores for each person because this will affect the family as a whole.

My wife is admittedly quite bad with numbers and finances. However, I recognize this fact and take over most of the financial responsibilities for the household, while she will focus on her own strengths to benefit the family. I’ve even been solely responsible for managing her credit score for the past few years. While it can sometimes be a burden, this is what you do in a real marriage when you’ve combined your life with another person.

Bank accounts like checking and savings accounts can also be combined. You may not see any savings by combining these accounts, but it can simply be easier to manage less accounts. When your income goes into multiple accounts, you can often be forced to move money around each money to ensure the proper amount is in the right location to pay the upcoming expenses. This can become quite exhausting to constantly juggle money just to maintain separate accounts.

When marriages end in divorce, joint bank accounts will often cause problems. Once spouse will typically try to take it over and clear out all of the money. For this reason, it can still be a good idea to keep your own bank account. You don’t have to use your personal bank account for the marriage, but it can be comforting to have a few months’ worth of savings there as a security blanket. I personally do this in my own marriage because of experience – I’ve been legally separated from my wife twice during our marriage.

Quite frankly, the need to maintain a separate checking account from my wife pisses me off. For me, marriage was originally about living a life with someone. There wasn’t a need to take personal protections for yourself against your spouse. A potential divorce staring you in the face changes all of that. You realize that being married leaves you exposed in the worst ways if someone else decides to try to take advantage of that fact. Even when you trust your spouse, I’d still highly recommend keeping a secret safety net for yourself just in case the worst does happen one day.