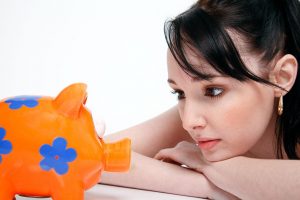 In general, you don’t want an emergency fund to be placed at risk with an investment since you may need it when stock values are at recent lows. However, you also don’t want your cash to just sit around in a checking account without earning any money for you. This is when a high yield savings account can be useful.

When you’re looking for the highest interest rate possible for a savings account, you can usually find it online. Again, these won’t be great rates, but they’re often much better than what big banks can offer. Best of all, you don’t need a huge deposit to qualify for the best rates.

, Transportation Alliance Bank, is based in Utah but offers high yield savings accounts online. They’re currently paying 1.26%, and this rate is among the absolute best in the industry among established and trustworthy banks.

Bread Savings Bank is another industry leader in online savings that offer high interest rates. Their accounts are a bit lower than TAB at 1.15%. If you’re willing to lock up your money for a whole year, you can earn 2% APR from their CDs.

Even though it’s more convenient for most people to have a savings account that is attached to their existing checking account with a big bank like Chase, Bank of America, Wells Fargo and even Capital One, they’re unable to offer interest rates that can even come close to other online accounts.

Capital One comes close at 0.8% APY. I have a Bank of America checking account, and their savings accounts are quite pathetic. Base users earn horrible rates that aren’t even worth the effort at 0.01% APY. Even when you can drastically increase deposits to $100,000+, they’ll barely make that better at 0.04%.

For anyone that would keep a low amount of money, less than a couple thousand dollars, in a savings account, you can actually end up losing money using big bank savings accounts. Most of them charge monthly maintenance fees on your account if you don’t keep a minimum balance that is often $1500 – $2500. The amount of money you would need in your account to recover a single month of those maintenance fees is quite staggering. As a result, most people will lose money instead of earning from interest over time. You’re much better off going with an online savings option that won’t charge you fees and gives the best rates even with a $100 deposit.

It’s a good idea for anyone to save an emergency fund. The standard rule is to keep six months of your earnings in this emergency fund. However, I honestly think it can be a good idea to have much more than that, if you’re able to save that much. Even a one-year emergency fund can be eaten away before you realize it when you lose a job in a bad recession when nobody is hiring.

When you compare average stock market returns to a high yield savings account, it’s really not even a close competition. In the long run, markets always perform better. For this reason, it can be really tempting to invest your emergency fund since it goes untouched more often than not. However, this can be a bad idea for a few reasons.

In general, securities like stocks are usually liquid investments that can be sold at any time and converted into cash in your bank account within a few days. There are times when the market is plummeting when there can be liquidity issues. When there aren’t enough buyers to cover those that want to sell. You may not even be able to quickly cash out at a loss.

For this reason, keep only as much as you need in a savings account paying you high interest rates. The rest should go into investments with much better annual yields to grow your wealth over time.

A final option that you could consider is a money market account. These are offered by many banks and brokerage accounts. Personally, I don’t recommend them. These funds are invested in various low risk options and usually pay pretty poor interest rates like 0.25% in good times. There’s a potential for loss though. As a result, money market accounts will usually run a credit check on you when you apply.

I realized that I left cash sitting in my account between trades on a regular basis and thought it might benefit from earning some interest on those funds. When I would login to my online brokerage account, I would be frequently bombarded by messages prompting me to join.

One day, I gave in and followed the on-screen guide to sign up. I read everything on those pages but neglected to read their terms and conditions legal mumbo-jumbo, as many people do. It turns out they ran a credit check on me for that application, and I had no idea that would take place because they hid that info in small print on other pages.

My money market application was denied since I had bad credit at the time. However, they also decided to close down my brokerage account along with it. I had open positions that I wasn’t even allowed to sell. Of course, I called them and raised holy hell about it. I eventually got them to unlock my account to sell my positions, and most had to be sold at a loss since I had missed my trading window in a range I had been swing trading.

In the end, they even tried to charge me a $50 fee to move my money to a different brokerage. I fought back and eventually got this refunded, but it was a royal pain to do so. I switched to Fidelity that day and have used them with zero complaints ever since.