↓
Home→Investing→Harami Pattern – How to Identify & Trade Inside Bars 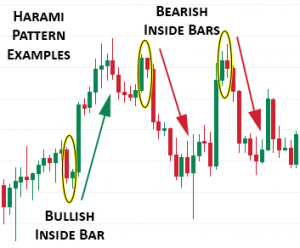 For other candle chart patterns, I’ve covered each pattern individually. I’ve combined the two inside bar patterns onto a single page because I personally find these two are commonly confused. By teaching you how to identify and trade them in one place, my hope is that the difference between the two will be much clearer. This can simply make the reliability of this indicator much more accurate.

The Harami candlestick pattern contains two candles – a mother and a child. The mother will be much larger than the child. In fact, I like to see the mother body be at least three times the size of the child body. The child body should be completely covered by the mother, and the child should close within the mother body. The candle colors can technically either bullish or bearish. You want to focus more on the body sizes, their positions, and whether the child is at the top or the bottom of the mother body.

This is one of my favorite candlestick patterns. Most of the others are trend reversal signals, which is great. However, I like to have a variety of tools in my trading arsenal to increase how reliable and accurate my predictions can be. The Harami arms me with a continuation pattern. It’s actually both a continuation and trend reversal pattern, making it one of the only candles that can make that claim.

First I’ll cover the bearish inside bar. I’ve created an illustration on the right that shows you how to identify it.

For this example, I’ve made the mother body bullish and the child body bearish. While the colors don’t actually matter, this is my preferred setup for the bearish Harami pattern. The #1 thing to note that is special about this specific pattern is the placement of the child body. Notice how it is located at the top of the mother. This is what truly makes it a bearish Harami signal.

When you’re targeting a trend reversal, this pattern can show up after a short-term price increase in a long-term bear market. It could also show up as a continuation during a price downtrend.

The opposite Harami pattern is the bullish inside bar. Take a look at a picture of it to the right to learn how to identify it.

Again, the body colors don’t truly matter here. However, I like to see the bullish inside bar set up as a bearish mother and a bullish child. The main way to identify this pattern in addition to other factors I’ve already discussed is the location of the child body. This time, the child body is at the bottom of the mother. I feel like being able to see both of them can really help with identification purposes. You’re basically just looking for the child body’s location against the mother, and potentially the candle colors being secondary.

You’re looking to see a bullish inside bar as a continuation pattern during a rally or as a reversal indicator after a short-term price decrease. I love using this specific pattern to open long positions, and then I can often use a bearish pattern later to exit the trade and take profits.

With a bearish inside bar, the bulls have solid control of the market during the first candle. There has been a lot of buying strength and activity, which has led to a rapid price increase to create a large mother body. Then conditions begin to change during the second candle. The shorter body tells you there is market indecision among the buyers and sellers. However, sellers have shown their strength to reach this point and may even be tipping the market trend in their favor now. This can lead to a reversal sending prices down.

The opposite situation happens with a bullish inside bar. First the bears have the power and their high activity level quickly drives down prices, and this creates the large mother body that is bearish. Then the bulls begin to even out the market during the second candle. Price action remains limited, so sellers activity has fallen and buyer activity has increased drastically since the previous candle. This can also cause the market trend to reverse to the upside.

The key thing to remember about the emotional state of traders when a Harami pattern appears is that there is a lot of indecision in the market. Prices were heading in a clear direction, and now that trend may potentially switching directions. Trading activity has taken a brief break and is preparing for the next move.

How to Trade the Harami Pattern

I’ve found a real-life chart from cryptocurrencies that provides a great example for both the bullish and bearish Harami patterns. It even shows you a continuation pattern and trend reversals, so you get to see nearly everything it can do in a single chart. Take a look at it below… 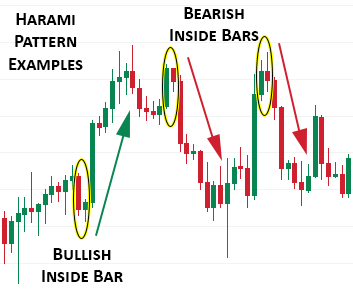 This chart begins with a market trending upwards. A bullish Harami shows up, and the price then rapidly rises afterwards. That was a continuation pattern. Next, a bearish inside bar is displayed, and the price action quickly drops. This actually happens a second time in quick succession. The small piece of the chart presented three excellent trading opportunities.

With the example chart above, you’re likely wondering how to tell the difference between a continuation and trend reversal pattern. The current market direction is the first indication. In my chart above, the price is rising when the bullish Harami appears. Since that’s the direction the bullish pattern would already push prices, it’s a continuation pattern. By comparison, the bearish bars are both trend reversals. Prices increased before those candles, but the pattern hints at downward prices, which makes it a reversal since the price action doesn’t match the future price action.

Another way you can know whether a reversal or continuation is taking place is by utilizing support and resistance lines. Supply and demand order volume, trading activity, trend levels, moving averages and many other factors can produce levels of support and resistance that tends to keep price action bound between two lines. When you can identify those levels, you can use them to help confirm trades that you’re considering because of a candlestick pattern.

In this example, the inside bars end up marking where your support and resistance levels are at currently. The bullish Harami candlestick pattern seems to have set a new line of support. This support can be traced up through the bottom of the candle bodies to the right. There was one brief breakout down below that level, but that was quickly retaken and never closed below support. You can also see where the resistance line is at by tracing a line across the top of the three peaks on the chart, two of which are bearish Haramis. When a bullish inside bar pattern shows up at the support level, it’s a great time to open a long position. When the resistance line is hit and a reversal indicator shows, you can then exit your trade to take profits. Simply do the reverse to trade short positions.