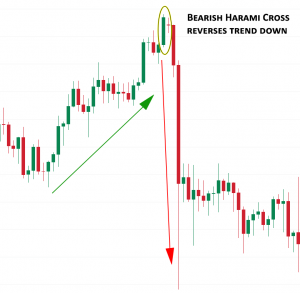 The Harami Cross candlestick patterns are a combination of a Harami inside bar and a neutral doji. It can sometimes mark a powerful market reversal, although you should always wait for confirmation before initiating any trades on this pattern. In general, you may not rely on this signal to perform trades as much as other candle patterns, but this can still be a useful tool to identify shifts in the price action that may lead to profitable trades.

There are both bullish and bearish versions of the Harami cross. They work exactly the same except they have a slightly difference appearance and usually reverse the price trends in opposite directions. This gives you options to both buy and sell positions with this indicator. 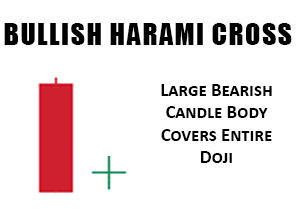 First take a look at the bullish pattern. The first candle will always be bearish and have a large body. The second will be a doji candlestick. This could be a neutral, dragonfly or gravestone doji that is bearish or bullish. The specifics of the doji aren’t that important. However, the one key thing that you do need to look for is the full doji candle including wick and shadow getting covered by the larger body.

You also want this pattern to appear after a short-term bear market. With the price action trending down, these candles would indicate a possible trend reversal. However, I highly recommend that you continue to watch the prices at this point. I’ll talk about this more later in this guide so you can learn how to trade it. 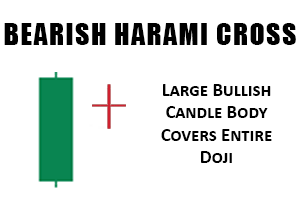 The opposite Harami cross is a bearish signal. This will start out with a large bodied bullish candle, and then get followed up by a doji. Again, the exact type and size of doji doesn’t matter. It simply needs to be completely covered by the body of the first candlestick.

The bearish cross needs short-term price action to be rallying before the pattern appears. This then gives the market the potential to reverse down. When you’re holding long positions and see this bearish indicator, it may be a good time to exit your trades and sell. Be sure to confirm the trend reversal before to take action though.

When the Harami cross properly appears after a trend, it can mark a reversal in prices. This happens because the overall pattern tells you that one side of the market is losing strength, which has led to short-term indecision in the price action.

With the bullish signal, a price downtrend has slowed and led to decreased selling activity and power by the bears. Indecision sets in among the entire market causing little price movement temporarily. Bulls see this as an opportunity to take control of the market. If the next candle or two is bullish after the doji and the asset value has recovered, a rapid bull rally is possible when other factors also agree.

For the bearish indicator, the rally has bulls firmly in control first. As this buying power begins to stall, resulting in a doji, the sellers see their chance to take over. This is again another period of indecision in the price action that is offering this opportunity. When future prices begin to fall and recapture gains from the first candle, you can confirm the reversal.

How to Trade Harami Cross

I’ve included a candlestick chart here that perfectly illustrates a bearish Harami cross. First there is a short-term bull rally causing the price action to rise up to the first candle of the pattern. A neutral doji is then fully consumed by the parent, leading to a stalled market. A very rapid sell-off then begins after it appears. The next candle then offers confirmation of the trend reversal since it closes below the opening price of the first pattern candlestick.

At the close of the confirmation candle is the time when I would place orders to short the security or possibly take profit on positions I’m holding. However, I really recommend avoiding trades based solely on this signal. While my example did provide a fast trade that would’ve been extremely profitable, this will not always be the case, so you need to be more cautious.

Never place a trade when this pattern appears. Always wait at least one more candle after it for a confirmation of a trend reversal. For a bullish Harami, the reversal is confirmed when the price action closes above the opening price of the first pattern candle. With the bearish Harami, confirmation is achieved after the price closes below the closing price from the first candle.

Only consider placing buy or sell orders after you get confirmation of the reversal, but you should also consider including other indicators with this decision. Support and resistance levels matching up with this pattern offer additional confirmation that the reversal could be strong and worth trading.

Another indicator that can be useful to use along with the Harami cross is the relative strength index or RSI. When this is telling you that a reversal is likely taking place, a support or resistance level is being tested, and the pattern appears, you can be much more confident in placing a trade.