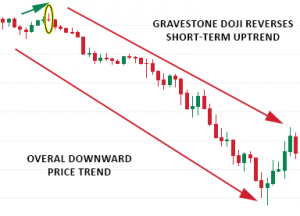 The gravestone doji candlestick is a powerful bearish candle that can sometimes mark a trend reversal. This makes it a great indicator to use for entering short positions and exiting long positions during an overall bear market.

There are two other doji candles: the neutral doji and the dragonfly. All three patterns used together can allow you to trade almost any kind of market conditions. However, like all other candlesticks, make sure you also use other signals and indicators such as support and resistance levels when making trade decisions.

The gravestone doji is a bearish candlestick pattern. However, it must occur at the end of a short-term uptrend during an overall down trending market to qualify as a gravestone pattern. When this candle appears, you may be able to exit long positions and/or enter short positions, but you should always verify the trade with other indicators, which I’ll be covering later in this tutorial.

Like other candle patterns, you should also analyze gravestone dojis using longer time frames like a 4 hour or daily candle chart. This gives you a much more accurate picture of the overall market conditions and makes it much less likely that you’ll get a false signal from these patterns.

The picture below shows you how the gravestone doji can look, although there are also more variations beyond these. You could consider these to be proper gravestones, although less than perfect doji candles can still be great trade indicators too.

A gravestone doji pattern consists of a single candle, which can be either bearish or bullish. However, there is often no price movement at all, resulting in an extremely small body. Gravestones also have a long upper shadow, which looks like a tombstone sticking up out of the ground.

Lower shadows should be non-existent or extremely small, especially compared to the overall size of the upper shadow. I like to see upper shadows at least twice the size of lower shadows to consider it to be a pattern match.

Remember that this doji can show itself at any time in a price chart, but that doesn’t guarantee that it’s time to make a trade. You must analyze the other market conditions before you can make that decision. If the doji doesn’t show up after a short-term price increase, ignore it.

The emotional state of buyers is declining when a gravestone doji appears. They’re losing ground in the market and strength and activity levels are beginning to capitulate to the sellers. As the buyers lose their power, this often causes a flip in short-term trends causing the price action to reverse lower.

The sellers are now gaining power and increasing their trading activity, which is how they’ve been able to overpower the bulls. This often results in a quick buying spree, which will usually be the catalyst to propel prices higher.

The short candle body tells you that little to no price moment occurred. However, the long upper shadow shows that the buyers certainly tried and temporarily succeeded pushing the price higher, but the bulls were able to regain control of the market and drive prices back down before the close. The shadow is the key aspect here that tells you a lot about the emotional state of traders.

How to Trade Gravestone Dojis

Since you want to look for gravestone doji candlestick patterns during an overall market downtrend and its appearance indicates weakening buyers, this signal is often best used to open short positions. You could potentially use it during neutral markets as well.

First notice the overall downward price trend, and then the short-term price increase. Right after this price increase, the gravestone doji appears, which indicates that buyers lost power and sellers are now regaining control. Prices then decrease rapidly.

Besides waiting for the right candle setup to occur, you also want to match this pattern with various support and resistance levels. This could be moving averages, supply and demand levels, or simply trend lines. You need to plot those levels on a chart and figure out which ones are relevant for the current price action.

As the short-term price of a stock or cryptocurrency (or other securities) increases, watch for it to hit a level of resistance. When that level is reached and a gravestone doji appears, you can take the combination of both indicators as a signal that a trend reversal is likely to occur next.

When conditions tell you that it is time to make a trade, you should be opening short positions and/or closing long positions with this indicator.

I’m personally a big fan of doji candle patterns like the gravestone or dragonfly. Many candlestick patterns, like engulfing bars, will often not tell you about a trend reversal until it is partially underway already. That timing delay can simply cause you to lose out on potential profits, since you can’t confidently open your trade earlier until the signal completes. With a doji, you actually find out about a reversal before it is going to take place, which gives you a much better opportunity to open a position that has a great profit potential.