After you graduate high school and head off to college, you’ll get forced to learn some financial responsibility. With limited funds, most college students are constantly broke. This causes a financial survival mode to kick in, where you learn to stretch your money by being very frugal and careful about how it’s spent.

In the long run, those lean college years can actually teach you a lot about money. They’re skills that will come in handy the rest of your life. I was a broke college student once upon a time, so I have some really useful tips and strategies to share with you about my experiences. This knowledge can help you stretch your buck as far as possible until you graduate and start making a real income.

I went to a different state for college, so I didn’t know anyone locally at first. When you’re still living at home and going to university or a technical school, your parents will often handle your bills for you. It can be a very different situation when you go to an out-of-state school though. I was given $100 per week by my dad (around the year 2000). It seemed like a lot of money at first, but I quickly realized that wasn’t the case. I had to cover my food, gasoline and even school supplies with those funds. I couldn’t even get adequate school supplies for that amount, especially since I was going to an art school.

When I started to run out of money on Thursday and didn’t get more until Monday, I had to get creative to get by. Before I got smart, I did some stupid things though. One of the dumbest things I did was to sign up for a credit card. The predators were set up in the lobby of my school and put an active card with a $1000 limit in my hands before I left the booth. Needless to say, I used it irresponsibly. It was quickly maxed out, went into collections and destroyed my credit score before I even knew what I was doing. I paid for that mistake for many years afterwards.

Don’t get sucked into the credit card trap like I did. Live within your means, no matter how impossible it may seem. Figure out how to get by with what is available to you. When you leave home and move into a college dorm, you expect to have some amazing fun. The best times of your life, right? Notice how I didn’t talk about any kind of entertainment expenses in the discussion about my college funds above? That’s because I didn’t have any. If you blow the little bit of money you have on alcohol and partying, you’ll probably end up starving unless you can figure out a way to eat all the time without spending any money. 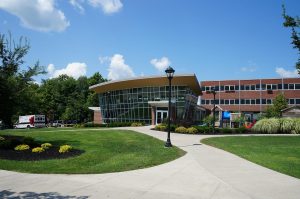 Before I start talking about some specific strategies you can use to help when you’re a broke student in college, there’s one more warning I want to offer you first. When you head off to University, you’re there to learn, make good grades and graduate with a degree. Anything else that you do that takes your focus away from that #1 priority will simply harm you long-term. I’m talking about harm that could even affect you for the rest of your life.

Personally, I spent too much time trying to have fun and the rest of my time trying to make some extra money to avoid starvation. I ended up dropping out of college after 6-7 months, about 75% done with my Freshman year. Some of my lack of attention to school was justified. I was literally starving at school, even with my additional efforts. During that 6-7 months, I went from 240 pounds down to 165!

In hindsight, everything worked out for the best for me. If I had graduated with a degree in computer animation and had a high paying job, I doubt I ever would’ve made a career as an entrepreneur starting my own internet businesses. However, most people will be much better off if they concentrate on making good grades and graduating while they’re at school. You don’t want to go through all of that struggle and waste a ton of time, money and effort by dropping out.

In most cases, food ends up being the main issue in college. You’re still growing and very active, so your body wants to consume a lot of energy. When your financial situation doesn’t match up with this need, you can run into some issues. This is what happened to me. I got by in the beginning of school but couldn’t afford to eat like I was used to eating. Even after I scaled back my food expenses, it still wasn’t enough.

That is when a fellow student introduced me to the Ramen noodle diet. They were very filling and super cheap. I think they were about 10 cents a package and maybe less when bought in bulk. They only took three minutes to cook too, so they were an excellent meal option for a student always on the go.

I’m a picky eater, so my meal options were very limited. Rice and Kraft macaroni and cheese were also big staples for me. I had a lot of carbs, but I wasn’t really able to afford much meat. That’s when I started thinking about getting a job.

My school was basically just a single, five-story building in downtown Atlanta. However, if you go to a more traditional school like Clemson University, you’ll have a cafeteria on campus. Some schools will have affordable meal plans that you may be able to take advantage of with your budget. Unfortunately, this wasn’t an option for me though.

I reached a point at school where I realized that it wasn’t possible to get my school supplies and pay for the gas back and forth to school with enough money leftover to eat each week, even after going on the Ramen diet. I figured the easiest solution to my food and lack of money problem was to get a part-time job. After some hunting around, I ended up picking a slightly lower paying job solely because of one of the employee perks.

The job I got was working at a locally owned Subway restaurant. The owner was good to his employees, especially about food. Most restaurants will give 50% off the price of a meal that you eat while you’re on break at work. However, this guy gave employees a free footlong sub for every 4 hour shift. I’d do a 4 hour shift during the week and then two 8 hour shifts on Saturday and Sunday. In addition to the paycheck, I also got 5 feet worth of sandwiches each week. I only ate half a sandwich each meal, so that covered 10 of my weekly meals. Not really being a breakfast eater, that actually took care of 10 of my 14 meals each week!

Think about the things you need to get by being broke, and see if you can find a job that can provide that for you. When you take care of a big need and end up with a paycheck, you stand a chance to have money leftover each week that can be used to have some fun! This tactic is what actually allowed me to start having some kind of a college life instead of being dead-broke all the time.

When you have family living nearby to your University, you can sometimes lean on them for some additional support. With a family that has kids, it’s often not a big deal for one extra person to join the dinner table. This is often the case in my house. Pre-packaged meat and other side items can’t really be scaled back to make exactly how much you need, so I almost always end up with leftovers. If you have someone like this close to you, you may be able to join them for a free meal a few times a week.

Most of my family lived over two hours from my student apartment. I had an uncle that lived nearly an hour north, but that wasn’t really feasible to consider for help since it costs more in gas than I would save in food. This left me to pretty much fend for myself, especially since I didn’t know anyone at the school or even in the entire city when I first moved there.

After I made some friends through school, work, and a roommate that had lived in the city for a long time, I was able to start leaning on a few other people for help. However, this was random and couldn’t really be depended upon. I’m not the type of person that will force myself upon someone for help and often only take it when it’s offered. However, you may have a completely different situation from me. Friends and family can often be the key to helping a broke college student overcome financial struggles until they graduate.