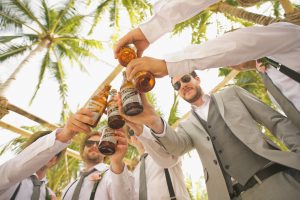 Not all side hustles are about hard work. It’s really more about using your strengths to your advantage. Extroverts gain energy being around and interacting with other people, while this can be an exhausting activity for introverts.

Anyone that is outgoing, friendly, and loves spending time with new people can put those skills to use to make money. This can also apply to people that are very attractive, usually women but sometimes men too.

This article is going to teach you about three businesses you can start with these personality traits. These are side gigs that require meeting up with others in-person, but you can find new work at home on your computer.

Whenever you’re meeting people that you don’t know, make sure you take some extra precautions to protect yourself from potential dangers. Let someone else know where you will be at all times and when they can expect to hear from you again. You’ll need somebody that you can trust who can call for help for you if you don’t get in touch after meeting a new client.

While there are some opportunities for guys to find work in this industry, beautiful women do tend to make the most money and have the easiest time landing new clients. For men, you’ll likely have better results renting yourself out as a friend instead of a snuggle buddy or date. Wingmen are often in high demand if you’re good at approaching women in bars to help others get a date.

Take a look at the three business opportunities for extroverts, outgoing, and aesthetically pleasing people below.

Get Paid to be Friends

For extroverts, you can actually have a side hustle where you get paid to be friends and do things with people. RentAFriend lets you sign up for free and list your services as a friend for rent. You get to charge whatever you want and keep 100% of the earnings. The bad news is that registration is currently closed for new accounts. Visit the page linked above in the future on a regular basis if you’re interested in doing this type of side hustle.

Since it doesn’t ever cost you a penny on this site, they’re making money from the people that want to hire friends. They have to pay a membership fee to use the site, so you know anyone contacting you here is serious about hiring you. A few hundred to a couple thousand dollars a month looks to be the average earnings for using this site as a side hustle. On top of that, you get to do a lot of fun activities for free and meet new people at the same time.

When you get hired as a friend to go eat or go to a concert, they’re paying for those activities on top of paying you an hourly rate. This deal is rather hard to beat, so it’s not surprising that over 600,000 people signed up for this as a side hustle and applications are currently closed (July 2022).

One side hustle that is quite different from the rest is to be a professional cuddle partner. Some people crave touch and closeness with another human without the relationship, and some of these people are willing to pay to get it.

In general, this is a side hustle that is almost exclusively done by women. A site called CuddleComfort is the leader in this industry. Cuddling isn’t sexual and will actually get you banned on that site, but the demand for professional cuddlers is usually for women. In fact, only 3% of professional cuddlers on the site are men, and the male cuddlers usually only have demand from other males.

Professional cuddlers get to set their own rates, but the typical rate on the site is about $80 per hour. Some will let rates lower when they’re new, and there are some with rates much higher than the average. I would imagine that younger and extremely attractive women will demand the highest rates.

There will usually be some travel involved, since you’ll have to go to the customer in most cases to cuddle, so this will take away from your profits a bit. CuddleComfort also takes 15% of your earnings. Pay is done before the session begins, so you don’t have to worry about getting paid afterwards. If you don’t get paid, you don’t work, it’s that simple and straightforward.

Get Paid to Date

Do you love dating new people and consider yourself attractive? You can actually make money dating using a site called WhatsYourPrice. This is a spin on traditional dating. Sometimes the really great guys or girls and the most interesting ones often get passed over on dating websites simply because they’re not as beautiful as other people.

I was an overweight nerd in high school that got very few dates, but I knew I had something special to offer the right lady. With enough patience, I was able to win over my beautiful best friend. We’ve been married for almost 20 years now and have three wonderful kids together. Most quiet or unattractive people don’t get that chance though.

On WhatsYourPrice, anyone can get the attention of the prettiest women and the most handsome guys. This is NOT intended to be an escort service though. It’s to give other people a real shot at dating – to give someone a chance you might not ordinarily consider. You get to choose how much you get paid to go out on dates. Only first dates are paid though. If you like someone that you date and want to see them again, that’s called a relationship! Until you find that special someone, you can get paid for your search with this side hustle.