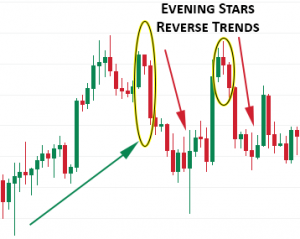 One of the most powerful bearish candlestick patterns is the evening star. The pattern is often an indication that the market has reversed from bullish to bearish, at least short-term. For this reason, it can be an excellent signal to use to exit long positions or to open short positions.

The evening star is the opposite, bearish version of the bullish morning star candle pattern. A combination of the two patterns can easily be used to swing trade markets between the support and resistance lines.

I highly recommend using other trading indicators in combination with candlestick patterns to get the most accurate trades. However, one of the few patterns that can sometimes be traded without other signals is the evening star candlestick.

This is a trend reversal pattern that will mark the transition from a bullish market to a bearish market. In general, it’s best to stick to trading it during a long-term price downtrend or possibly during sideways markets. 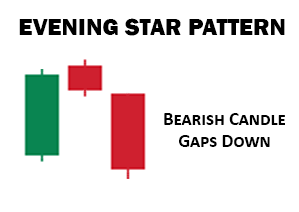 This pattern contains a total of three candlesticks. There are actually a number of conditions that need to be met in order to qualify as an evening star. I’ve outlined these requirements below:

It can take a bit of practice to be able to easily recognize the evening star and even its opposite, the morning star. However, once you learn to see this pattern, you should be able to easily pick it out on a chart with just a quick glance.

One of the negatives about this type of pattern is waiting for it to complete. When you’re watching a candle chart get generated live from current market prices, you can’t actually confirm the pattern until the close on the third candle. However, by the time that happens, the price has already moved down some. This causes you to lose out on some potential profits since you won’t be able to enter the trade at the best possible price. Some tactics involve entering a trade early, but there is also added risk to that strategy too.

With three candles in the evening star pattern, you get to learn a lot of useful knowledge about the current emotional state of trades in the market. Before this pattern begins to form, the price action will be trending upwards, and the buyers have a firm hold on the market activity.

The first candle, which is bullish, tells you that the buying power and activity level of the bulls is outpacing the bears, so they’re in control of the market and driving prices higher. This activity and power then starts to show its weakness in the second candle. The much shorter body shows that price action was limited. This either means that bulls and bears were fighting equally as hard and kept the price movement to a minimum, or the bull activity level simply declined.

When the third, bearish candle appears, you know that the market trend has been reversed. Buyers have lost their power and activity levels have drastically declined. Bears now have a firm hold on the price action and will be driving it lower in the short term.

How to Trade the Evening Star

When you’re holding a long position and the evening star pattern appears, it’s time to sell and take your profits. If you’re looking to open a short position, this is the time to do so.

As you can see, there is a short-term bullish market, with the price action rising. If you could zoom out on this chart, you’d see that the overall market is bearish though, which is why this pattern is valid to trade. Once the pattern appears, the prices drop drastically before rising again. This actually happens two times in fairly quick succession in this chart, so there would’ve been two great trading opportunities here.

Out of any candlestick patterns, the evening and morning stars could potentially be traded without other indicators. However, you’ll still be much better off and make more profitable trades if you still rely on other trading signals to confirm trend reversals.

Like other patterns, you’ll want to utilize support and resistance levels to determine the likely places where a market trend is likely to reverse. Since this is a bearish pattern, you’ll often want to look at resistance lines to initiate trades.

Make sure you are viewing your chart on a longer time frame, such as 4H or 1D. You’ll get much more accurate candles this way. You can also see supply and demand orders better at that timeframe, and those orders will often form levels of support and resistance that you can use to confirm trend reversals that seem likely when the evening star candlestick pattern makes an appearance.