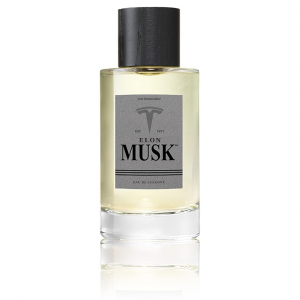 June 28th was Elon Musk’s 51st birthday. Around that same time, he disappeared from Twitter for about 10 days. People went crazy with boredom and speculation without their favorite Twitter personality to keep them company. Just because he’s the richest man on earth doesn’t mean he’s not entitled to take a vacation, especially for his birthday. He has now finally returned after a visit with the Pope!

Tesla has also released their second quarter results for 2022. While sales just missed estimates, I actually view it as a positive report for the company.

I was reading an article on Elon’s birthday on June 28th that was about him, and a sudden thought crossed my mind. There’s a Musk cologne that’s been around for a long time. It made me wonder if anyone had ever attempted to make an Elon Musk cologne meme. I did find one or two examples on the internet, but they weren’t really what I was imagining. They were just basic bottles of cologne with his name or face on it. I wanted an authentic Musk brand cologne for Elon, lol. Yes, I realize how dumb this probably sounds. It’s all in good fun though.

I found the real Musk cologne made by Tru Western. You can find Tru Western Musk cologne here. I want to say that this post is entirely satirical and not intended for profit of any kind. I have no advertisements or anything to sell on this page. Musk is a trademarked brand owned by Tru Western, so they own the rights to this name. Hmm… maybe you should do something about that Elon. If I were the richest guy on the planet, I don’t think I would be cool with a company owning the trademark to my last name, just sayin.

So as a Happy Birthday gag, I photoshopped a bottle and turned it into Elon Musk / Tesla cologne. Take a look below… 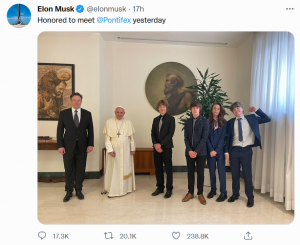 I found it rather funny what happened on Twitter when Elon didn’t tweet for 9-10 days. People started going a bit crazy. Boredom set in, which brought on endless postings of Bored Ape NFTs. Is it just me, or does that whole craze just seem a bit overdone? I thought a few of them were cool to look at, but now they’re everywhere being paraded around like some kind of fancy car. It’s like the digital way of showing off that you’re richer than everyone else.

It seems that Elon took a vacation to the Vatican and met the Pope! That sounds like a great way to spend your birthday instead of sitting around on Twitter like everyone else expected of him.

Here is Elon actually meeting the Pope. I’m not quite sure who the young guys are on the right, but the kind of remind me of One Direction. Was Elon and One Direction vacationing in the Vatican with Pope? I doubt it but thought the idea was amusing enough to write.

I get the feeling that Mr. Musk found it amusing that Twitter went a bit crazy while he was away. He made this comment, “Feeling … perhaps … a little bored?”, upon his return to Twitter yesterday, July 1, 2022.

Madness then ensued in the post replies. Everything from Happy Birthday wishes to corny jokes about being bored. I counted dozens upon dozens of Bored Ape memes here *sigh*.

We are all happy that Elon Musk has returned to Twitter so things can get back to normal though. It’s hard for market prices to make rapid swings when someone with 100 million followers isn’t tweeting, right? I sincerely hope he enjoyed himself for his birthday and got away from it all for a few days though.

Tesla’s sales report for Q2 2022 has arrived. Car deliveries were over 254,000, but this actually missed the estimated mark by less than 2,000 vehicles. Personally, I still see this as a good sales quarter though. Production is up about 25% from a year ago, so the company is still growing and ramping up their manufacturing efforts.

I also like to take the overall economy and market conditions into consideration. There have been a lot of companies with really dismal quarterly reports recently because of a wide variety of economic troubles and supply chain issues. Tesla isn’t immune from those troubles. They’ve actually been experiencing severe supply chain issues too. The difference is that Tesla and Elon Musk have found a way to deal with the current environment and still push forward.

All things considered together, I think Tesla is still on the right track. I don’t know how their stock price will react to the news on Monday when the markets open, but I don’t think it really matters short-term. I’m more interested in where they’ll be 5 – 10 years from now, and that future still seems bright. A near miss on Q2 sales for 2022 is a minor speed bump, in my opinion.

Disclosure: I own a single share of Tesla (TSLA) stock. All views expressed in this article are my own opinion.