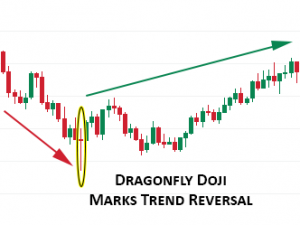 The dragonfly doji candlestick is an important bullish pattern that can mark a trend reversal from a downtrend to a rally. That makes this candle capable of being used to plan an entry point for a long position. You could also potentially use it to exit a short position to take profits before the price rises again.

The opposite of the dragon fly is the gravestone (bearish) candle. There is also a neutral doji that can be either bullish or bearish. These three candlesticks combined can be a great addition to a trader’s arsenal. Like other patterns, you should also combine dojis with other indicators and signals to initiate trades.

Like other doji candlesticks, the dragonfly signals a lack of price movement in the market. When this happens after a short-term downtrend in prices, the dragon fly can indicate that a trend reversal may be about to take place. Never trade this candle by itself though. You should always use a combination of other market indicators such as resistance and support levels to make entry and exit decisions. I’ll be talking more about trading strategies for this doji later in this guide.

In general, you’ll want to use this candlestick pattern during bull markets and potentially sideways markets. This allows you to avoid fighting the overall price trend, which will result in much more profitable trades. Since it will mark a trend reversal from a downtrend, I’m talking about short-term trends that bounce a price between support levels.

Take a look at the dragonfly doji candle pattern below… 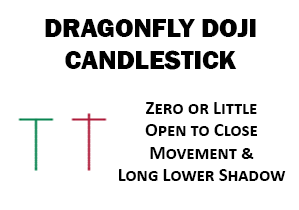 To qualify as a dragonfly doji, a candle needs to show little to no price movement between the open and closing price, and it needs to have a long lower shadow. I’ve seen both bullish and bearish candles that can qualify as a dragon fly, so it doesn’t matter if there was a small price drop or rise for the candle.

This candle is often a bullish signal, but it is also situational. During an overall market price uptrend, you will still have periods where the price goes back down to a support level before bouncing back up again. You want to watch candles as the price is going down and wait for this doji to appear. In that situation, it could be the right time to enter a long position trade, but again, you want to combine this doji with other information like support lines.

The dragonfly candle is an important trading pattern because it tells you really useful knowledge about the current emotional state of both buyers and sellers. Remember, you want to see this doji during a short-term price downtrend. This means that before the doji appears, the sellers have firm control over the price action as it drops.

When the dragon fly candlestick shows up, it tells you that the power and activity of sellers is beginning to dwindle. Little to no movement in the open and close prices tells you that no progress was made by the sellers, even though they previously had a firm grasp on the price action. Buyers have managed to prevent sellers from dragging down the value for this time period.

Another important emotional aspect of this candlestick shows up in the shadow. The long lower shadow is the remnant evidence of a fierce battle between bulls and bears, and the bulls have emerged victorious. This long lower shadow tells you that sellers did manage to drive down the price, at least temporarily. Before the price close, buyers were able to regain control and pushed the price back up to completely recover the losses. This switch of power is why the dragonfly doji candle pattern often signifies a trend reversal to the upside.

How to Trade Dragon Fly Dojis

Take a look at this example of a dragonfly doji candlestick…

First notice how the short-term price trend is going down. The dragonfly doji appears, and then the market switches trends to the upside. Ultimately, the dragonfly can have a lot of different but still similar appearances. I picked this particular example for you because it has a longer upper shadow, but still qualifies as a dragonfly and still led to a trend reversal.

If I were to zoom out on the chart above, you could see that the overall price trend is actually going up. It’s okay to swing trade the short-term price trends, but you don’t want to try to trade the dragonfly doji during a bear market.

Other indicators and signals should always be used in combination with dojis to make decisions on entry and exit points for trades. Any trend line or level of support or resistance can easily mark a price area where a trend reversal is likely to occur.

Using your trading software’s charts, map out likely or suspected levels of support and resistance. Then watch as candles approach these levels. When a breakout occurs below a support level, you won’t see a doji candle or other bullish trading pattern flash – the price will simply keep dropping with bearish candles. You want to see the dragonfly show up as the price action reaches support. This can then be used as a positive trade signal to enter a long position to ride the price back up.

Explore many different possible levels of support and resistance. I like to use supply and demand levels at the 4 hour and daily timeframes to find heavy areas of buy and sell orders, since these will often end up controlling the short-term price movement. Moving averages are also often support or resistance levels that can be excellent to use in combination with the dragonfly doji candlestick.