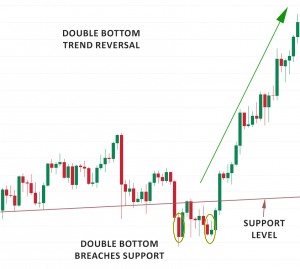 Some candlestick patterns are more complex, such as Double Tops and Double Bottoms. Instead of candles sitting directly next to each other, these patterns have candles that are spread out on a chart. This makes them more difficult to identify, but they can also present some of the most profitable trading opportunities if you take the time to learn about them.

This tutorial will help you identify and trade these candle patterns. You’ll find example charts below that demonstrate candles in action for each of these scenarios along with my tips for opening and closing positions. In general, you never want to trade these indicators by themselves. Always use support and resistance lines. This is even more important since you will actually need to plot these levels to able to accurately identify the trend reversals.

This pattern analysis is part of a much larger training series that will teach you everything you need to know to successfully trade candlestick charts. Make sure you take a look at the complete guide here: Candlestick Chart Pattern Guide. 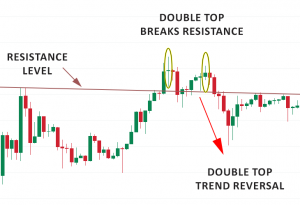 The double top is a bearish trend reversal pattern. It’s necessary to plot a resistance level on your chart to be able to identify it. You’re looking for the price action to spike above that resistance line two different times. When the second “top” drops back down the resistance line, you can confirm the trend reversal to be very likely and initiate a short position or sell your long position. When this reversal occurs, a short-term bear market will follow.

The main issue you’ll have is identifying this pattern, since it’s not a straightforward pattern like others I’ve discussed. Candles can be bearish or bullish when above the resistance level. The number of candlesticks and their sizes can also vary, so you’re not looking for a specific candle shape. That’s why the resistance line is so important. You need to see two spikes above that line. After the first spike, the price will often drop back down to the resistance level, and then break below it on the second test.

The double bottom is the opposite pattern, so this is a bullish set up. To identify these candles, you’ll need a level of support plotted on your trading chart. Now you want to watch for candles to break below support two different times. As the price action goes back above the support line after the second dip, a trend reversal and short-term bull rally will often follow.

This is one of my personal favorite candlestick patterns to trade since it often indicates a great long position buying opportunity. Since these are more difficult to identify, they will often catch some traders off guard, which can actually result in higher profits for you. I find it to be a fairly reliable and accurate indicator, but it’s still important to have a stop-loss in place in case the reversal doesn’t occur.

When using candlestick patterns to gauge the emotional state of buyers and sellers, you’re usually focusing on the shadow and body sizes of one or two candles. With doubles, you really have to think on a larger timescale to truly gauge market sentiment. Top and bottom patterns can play out over numerous candles and sometimes a couple dozen.

The fear and greed of traders is also heavily influenced by support and resistance lines. For a double top that breaks a resistance line twice, you have to consider that many traders expected the price action to bounce off of that line and not break through it. This can result in panic among sellers at first. Their expected shorts are no longer going to be profitable, so they dump them for a loss. Bulls identify a potential rally and buy up positions, so the price action rises at first. This rally is short-lived though, and prices again drop back to the resistance line. After this occurs a second time, the bulls realize that a false breakout has occurred, so they sell long positions. Bears are then able to take over the market and deliver a strong downside trend.

You end up with the exact opposite scenario with a double bottom. First bears think they’ll have a breakout below the support line. After this fails twice, the market swings back in the other direction with the bulls capitalizing on a nice rally. These patterns are basically support and resistance breakouts that end up failing and reversing.

How to Trade Double Tops & Bottoms

In general, I recommend trading with the market. Bearish patterns / double tops for bearish markets and vice versa. This helps you avoid getting stuck in a trade heading the wrong direction, so the trend is likely to follow the long-term market direction eventually. I also feel like price swings are more powerful when you’re moving in the same direction as most other traders.

For a double top, plot resistance lines during bear markets that are showing a short-term price increase. If the action can break above the resistance twice and then fall back down, the pattern is confirmed. This is a great place to enter a short position. If you’re holding long positions, you can be fairly confident that the price action won’t rise again for a while, so you should take your profits here.

With a double bottom, you need to monitor the support level during bull markets. After sellers take over price action in the short-term, wait for the cost to dip below support twice. When it breaks above the support line again, it’s the perfect time to open a long position or take profits on open shorts.

I’ve mentioned support and resistance levels numerous times in this post already, so I hope you can see how important they are for these patterns. In fact, you can’t reliably identify them with any accuracy without trend lines. The problem here is that these indicators cannot be plotted with 100% accuracy since they can be controlled by a wide variety of factors.

When I’m actively trading and trying to identify Japanese candlestick patterns, I’ll plot numerous potential support and resistance lines on my chart. Trend lines, a variety of moving averages, supply and demand at various timescales and more can all potentially act as lines of support and resistance that will typically constrain the price action. By putting a number of them on your charts, you can then watch the market test these levels to see if they’re accurate.

If you can very accurately identify these levels during trading, this is priceless information that you can reliably use to place orders when you combine them with double top and double bottom patterns.