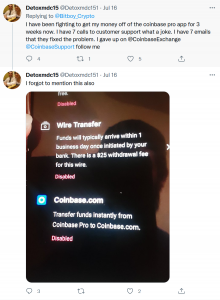 It’s almost like a witch hunt has started in the cryptocurrency industry now that rumors are swirling around about Coinbase potentially being insolvent after they announced the closure of their affiliate program on June 16, 2022.

I want to start this post off by saying the most important thing to remember right now: it’s VERY UNLIKELY that Coinbase is insolvent or even headed in that direction despite the currency crypto winter, other insolvent exchanges, and even in light of them closing their affiliate program.

These recent claims seem more like sensationalist opportunities for those spreading the rumors. A lot of the social influencers in the crypto industry like to act like they’re really smart and know what they’re talking about, but then they’ll throw around claims like these without any real proof to back it up. This is dangerous. It’s not dangerous for Coinbase really. The potential consequences will be felt by investors. 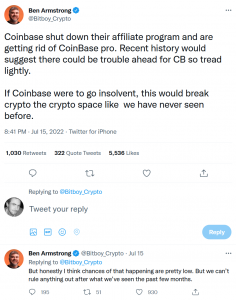 Take this Tweet by Ben Armstrong, aka @Bitboy_Crypto, as an example. I think Ben has a good head on his shoulders and is an advocate for investors in this industry. There’s nothing factually wrong about this tweet. CoinBase Pro and their affiliate program have both been closed, although the affiliate program is claimed to be temporary. CoinBase going insolvent would definitely break the crypto space like we’ve never seen before, just like he says.

The problem isn’t in the tweet itself though. The problem is how some people don’t really read everything or think things through. They’ll see a tweet like this one and immediately make sensational claims as though they are fact. Some people will actually read the tweet above and immediately post a comment talking as though they’re already insolvent and this is fact, not rumor or speculation.

It looks like Ben saw the same thing I saw in the reactions to his post, since he had this to say in follow-ups to his original tweet…

The point I want to make here is that you really have to be careful about what you’re reading online. This could be on social networks like Twitter or TikTok, but it could also be on websites. Tons of websites are now repeating these rumors and everyone’s getting riled up about the possibility of them going insolvent.

YES, it is possible that CoinBase could go insolvent. However it is UNLIKELY it would happen.

I believe Ben’s tweets had great intentions, and it’s not his fault at all that people try to read between the lines or ignore half of the things he says along with those comments. You DO need to be cautious right now. Getting caught with a lot of funds on ANY exchange when they declare bankruptcy is something that nobody wants to experience. Don’t assume that the worst is definitely going to happen. However, you should take steps to protect yourself from losses in the rare event that the unlikely does occur. It’s really hard to spread that message effectively without telling people WHY they need to be cautious, but the hypothetical WHY can often be blown way out of proportion.

Once the affiliate program closure was made news and rumors started to fly about CoinBase, it seems like any customer that was having any type of problem cashing out tried to make it public knowledge. Detoxmdc15 popped on on Ben’s tweet to comment about his withdrawal problems. This includes a screenshot, likely from his account, showing that 2 or 3 withdrawal methods are disabled.

Any Coinbase user can quite easily open up the website or their own app and see that this isn’t true for everyone or even most people.

I went to check it out for myself on CoinBase. Before this, I had no intention of selling any of my crypto and cashing out, but I did exactly this just so I could report whether it was successful or not. Just as I expected, I had ZERO problems selling and making withdrawal through CoinBase to my bank account. The deposit went through the same day.

So, when almost everyone can cash out without problems and a relatively small number of users are having problems, what’s the most likely explanation? I certainly wouldn’t jump to an assumption of insolvency or financial problems as the cause. However, if you base your opinion on limited information, it’s quite likely that you might assume financial problems if you thought that all users couldn’t withdraw their money.

The most likely reason why some people are having problems with withdrawals? It’s either going to be a very limited technical glitch or there may be an issue with that user’s account. We all know that CoinBase will make you verify your identity to be able to withdraw funds. If you deposit money from your bank that they were never able to collect, I could also see them halting withdrawals on an account until the issue was resolved. The point is that there are tons of completely reasonable explanations for this situation without jumping to assumptions about financial problems.

Once the rumors start circulating enough and the real facts get distorted more and more, you end up with tweets like the one above from Bitcoin Croissant. If you happen to read this @BTCcroissant, I’m not a lawyer, but if I were you, I would delete that tweet. You’ve taken the real financial collapse of three companies that did seem to have questionable tactics that could indicate fraud, and you’ve now lumped Coinbase into that without any real evidence to back it up? This all happened because Coinbase is closing their affiliate program, so that makes them a fraudulent ponzi scheme?

It’s really these types of sensational claims that get made without any real facts backing them up that cause the true problem. This all happens within a single day on social media – the facts devolve quickly into speculation and rumor, then the rumors are passed around as facts. 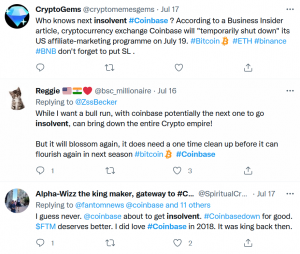 What I’ve shown you on this website with Twitter content is really just the tip of the iceberg. There have been tens of thousands of tweets, countless website articles, and I’m sure tons of rumors on other social networks as well. Here’s a small sampling of three more that I found back-to-back in my feed.

All three of these people are now basically spreading around Coinbase going insolvent as though it is an impending fact that has been announced to the world. When you run upon content like this on the internet in massive numbers and don’t take the time to look deeper by doing your own research, you can also fall victim and end up making those same assumptions.

The Dangers of Fake News

I hope you can see how facts get quickly twisted online. This is how fake news happens. The dangers that you face as a result can lead to dire consequences for you as an investor.

Consider this scenario. Let’s say Coinbase is financially doing fine. They might be struggling a bit because of the current crypto winter and want to make some cuts as a result to ensure they’ll continue to make money instead of going bankrupt. Then rumors start to swirl and eventually everyone is under the general assumption that Coinbase is indeed going to be insolvent and collapse. This causes a run on funds help by their customers. Crypto is unloaded from accounts on their exchange and everybody cashes out their money to go elsewhere. Even without problems before this event, something like this could technically cause a financial collapse of a company.

My point here is that fake news can sometimes cause it to become real news by brainwashing enough of the population to believe it’s true already. Fake news is a self-fulfilling prophecy.

Ultimately, I can’t guarantee one way or another what will happen with CoinBase or any other business. Anyone that claims otherwise is simply telling you a lie, possibly just to get more followers for their social media account. This is true now with really high inflation and lots of economic worries, and the same is true even during bull markets. Unless you have the real facts, you simply don’t know what will happen.

The real solution here is NOT to spend days on social media debating whether CoinBase is insolvent. It honestly shouldn’t change the way you’re investing or handling your funds. Instead, you should always protect your crypto investments from potential loss by storing anything you aren’t actively trading in a hardware wallet like a Ledger.

I have another article on this all about the cryptocurrency hardware wallets that I highly recommend as your next step. I’m not selling hardware wallets, and I also have no affiliate or any other kind of connections with the manufacturers of these devices. My sole purpose in recommending them to you is for your own protection. I personally use one and know the extra safety they can offer, so the best I can do to help you stay informed is to let you know about hardware wallets too.