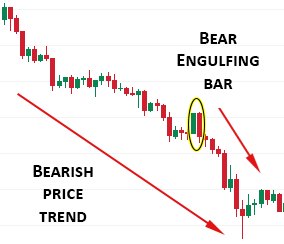 One of the most powerful candlestick patterns is the bear engulfing bar. Combined with other indicators, such as resistance and support levels, the bearish engulfing bar can often signal the end of an upward price action trend and the reversal to a downtrend.

This engulfing bar candle pattern can be an entry or exit point for trades, depending on whether you are long or short. When you’re holding a position and this pattern flashes under the right conditions, it can often indicate the best time to sell your asset and take profits. Anyone seeking to open short positions in a downward trending market can use this indicator to let them know when to open their trade as downward price action is likely to follow.

A really useful candlestick pattern is the bearish engulfing bar. Along with other indicators, the appearance of this pattern after an uptrend in price can potentially indicate a trend reversal is taking place.

This pattern often marks the location where you will want to sell your open long trades to take profits before the price drops again. If you’re trading bearish trends, this would be the time to open a short position. 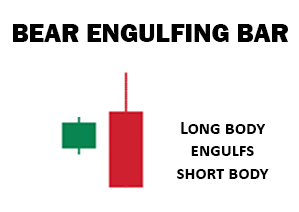 The opposite of the bear engulfing bar pattern is the bull engulfing bar, which can indicate a reversal from a downtrend to an uptrend. These two candlestick patterns combined can be a powerful set of tools for any trader. Keep in mind that longer timeframes are advised for more accuracy. These candles showing up on a 1-minute or 5-minute timeframe chart will often be false indicators that would likely lead to bad trades.

A bear engulfing bar has two candles. The first is a shorter body, a bullish candle. Next comes a bearish candle with a long body. The body of the longer candle is completely engulfing or covering the open and closing prices from the short body.

The larger the difference in body height, the stronger you can interpret the trading signal, but this doesn’t always hold true. I’ve seen the short body be 70% – 90% of the long body height and still spark off a massive sell-off. Again, don’t use this indicator by itself to initiate a trade though. I’ll discuss more about how to trade a bear engulfing bar later in this guide.

The underlying emotions of both buyers and sellers are revealed with this pattern. In general, it will indicate that sellers have regained control of the market. This shows up as a weakening of buying power and activity first in the short candle. As the second, bearish candle kicks off, the sellers are taking over and driving the price action down.

In many cases, you’ll see that there is little to no lower shadow on the bear candle. This shows you that the lowest price reached was the closing price, which can indicate even more downward price action is upcoming. These candles can be extremely pronounced during capitulation events. Bear candles will indicate the shifting market sentiment plummeting with rapid price decreases. The larger the bear body, the more activity and seller power can be inferred.

Even though this pattern is often an indicator of a trend reversal when it comes after an uptrend, you cannot trade the pattern alone and must use other information to make a trade decision. This will be covered next to teach you how to trade the bearish engulfing bar.

How to Trade the Bear Engulfing Bar

Take a look at the example below…

In this chart, you can clearly see the overall trend direction dragging prices down over time. This is the most important part of trying to trade a bear engulfing bar. You don’t want to try to fight the overall trend that is taking place at larger time scales.

During any market trend, price action will have a general direction, but the price will still fluctuate up and down in a cycle as it works its way down. Your most profitable trades will take place when you respect the downward price trend and try to enter a short trade when this candlestick pattern appears.

Another indicator that you need to pay attention to when you try to trade the bearish engulfing bar are support and resistance levels. This can also include moving averages and trend lines.

In general, the price action will hit various levels of support or resistance as the price swings back and forth. Try to identify these levels on your trading chart. When the price action reaches one of these levels, bounces will often occur. When a resistance level is hit during an overall downtrend and a bear engulfing bar shows up, this is a very strong indication that the price action is reversing. This can be the perfect place to begin a short trade, since it will give the maximum amount of price movement before it begins to swing upwards again.

By properly combining support, resistance, moving averages and trendlines with the bearish engulfing bar, you can often predict important reversals in the short-term price trend with eerie accuracy. This can simply yield very profitable trades.

Supply and demand levels can also be traded as support and resistance levels and are often even more power. This can especially be the case in sideways markets that do not have a clear up or down trend. Since these neutral markets tend to occur more frequently, you will need to learn how to trade them to avoid losing potential profits. If you only trade during up or down trends, you may simply sit on the sidelines for 70% of the time overall.

When there is not a clear market direction, these various levels will often contain the trading range. You want to look for the bear engulfing pattern to show up as the price action goes up and hits one of these resistance levels. Those are the most likely places where short-term trend changes will occur, giving you the best opportunity for a profitable trade despite a lack of clear market direction.

Engulfing bars will often make an appearance when resistance levels are broken. They can signify a true breakout or sometimes indicate a false breakout. Both of these scenarios can result in very profitable trades if you can identify the patterns in combination with resistance and support levels, as well as supply and demand levels. Large institution supply and demand is more likely to move the market when price action is moving sideways, so be sure to examine these levels on 4 hour and daily time frames to get a clear picture of where trend reversals are likely to occur.